Vahina Giocante is a French actress. As Marie in Marie Baie des Anges (1998), she is among a group of young wanderers who become enmeshed in love, hate, and violence on the French Riviera. In Lila Says (2005 in film) Giocante portrays a teenager who resides with her aunt in a rough neighborhood in Marseilles. A New York Times reviewer compares her to Brigitte Bardot in And God Created Woman, being a femme more vitale than fatale. Critic A.O. Scott says that Giocante's combination of innocence and womanly awareness is somewhat overwhelming. However, her charisma and Doueiri's style lend Lila Says an earthiness and romantic quality. The motion picture was adapted from a 1996 novel whose authorship is uncertain.

Born in Orléans, France, she went to school at the Lycée Paul-Cézanne in Aix-en-Provence and previously danced with the Marseille Opera. According to Vahina, her name means "Welcome" in Malagasy[clarification needed]. When she was 20 she had a son, Nino. His father is musician Martin Gamet. 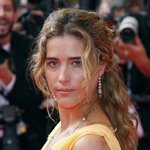