Naomi Millbank Smith is a 22-year-old professional dancer, singer, actress, Model and entertainer. She appeared on 2007’s reality show Shipwrecked, which was aired on Channel 4. Naomi Millbank Smith stayed on the reality show for over 3 months and during that time, she has captured the viewers with her charms, style and natural beauty as well as the ratings for the show has topped the lists. Naomi started her career in a very young age; she had an immense obsession for the performing arts and entertainment. Naomi from her early life found it pleasing to captures the hearts of her audiences through dance, music and entertainment. This realization led Naomi follow her dream as an entertainer in the industry.

Naomi Millbank Smith was born in Harrow and was raised in Canvey Island; she started her professional training in her teenage at Star Studios of Performing Arts. She has participated in number of festivals and won the much-admired title of “All England tap dancers of the year”, it was then that she was awarded with a full time scholarship to attend Performers Dance College in Corringham, but unfortunately, she broke her knee during her final year of the college and did not attended her final graduation show. After her injury, she has worked hard to pursue her career as a talented dancer, actress, and professional model.

Pitch Entertainment hired Naomi Millbank Smith as shows live presenter back in October 2007. Nowadays she is busy doing a show “Generation Sex”, for “5 channel 187 sky TV” that airs every Monday at 10 P.M.

Recently Naomi Millbank Smith with her fellow celebrities joined Sam and Amanda Marchant on their 21st birthday bash. The party took place on a riverboat in London on 25th June, 2009.

I am not sure about it but IMDB.com has lately added two movie credits under the name of Naomi Millbank, which include “Clubbed” and a 2009 movie “Gangster Kittins”. 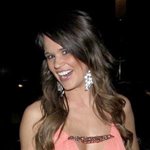