Marnie Schulenburg, a former gymnast, is a graduate of DeSales University. She's appeared in productions such as the Pennsylvania Shakespear Festival's "As You Like It" as Celia. She was at the Dramatists Guild of America in New York City where she took part in play reading and has also participated in The Flux Theatre Ensemble where she took part in reading new plays.

March 21st, 2007 marks Schulenburg's first television debut, taking on the role of Alison McDermott Stewart in the soap opera "As The World Turns". Her entry into the soap opera was a bit unusual; the re-introduction of the character took place online in collaboration with another CBS soap opera "The Young and the Restless". Schulenburg co-starred with actress Adrienne Frantz, who soap fans recognize as Y&R's "Amber Moore". The two girls were featured in the mini online soap opera titled "Digital Daytime: L.A.Diaries" that would set the storyline to later take place during Schulenburg's ATWT appearance. 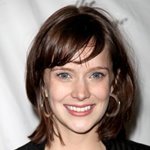