Jose Canseco Capas Jr. (born July 2, 1964) was a Major League Baseball player. He was born in Havana, Cuba, and is the twin brother of another major league baseball player, Ossie Canseco. His family left Cuba when he and his brother were infants, and he grew up in Miami.

Canseco did not attend college on a baseball scholarship. He was signed by the Oakland Athletics and began playing in 1986, causing a splash immediately. He was named American League Rookie of the Year after connecting 33 home-runs that year. In 1987, he was joined in the team by Mark McGwire, who hit 49 home-runs that year, and they became known as the Bash Brothers. In 1988, Canseco became the first player in Major League Baseball's history to hit at least 42 home-runs and steal 40 bases in the same year. That year, he helped the Athletics to the World Series but they lost to the Los Angeles Dodgers in five games. Canseco was named the American League's Most Valuable Player that year.

In 1989, Canseco was injured most of the year, but he still managed to hit 17 home-runs, and the Athletics won their first World Series since 1974, when they beat the San Francisco Giants in four games. Canseco experienced the infamous 1989 San Francisco earthquake before the start of game 3 of that series.

In 1990, Canseco came back in full strength, hitting 44 home-runs and taking the A's to the World Series once again, but that time, it was his team that got swept, when they lost to the Cincinnati Reds in four games.

Canseco's career seemed to take a downward spiral from there on. In 1992, he was traded to the Texas Rangers. He would later be traded to or signed by several other teams, and his offensive numbers dropped considerably.

In 1993, Canseco received unwanted attention when, during a game, he lost a fly ball in the lights and was hit in the head. The ball then jumped off the wall and out of the baseball field and was declared a home-run. That same season, Canseco suffered further indignity when he asked to pitch during a runaway loss; he injured his arm and was lost for the remainder of the season.

Canseco ran into trouble in his personal life various times. In 1989, his wife accused him of domestic violence after he allegedly ran his car into hers. That was the beginning of a series of accusations and run ins with the law that Canseco had.

Canseco retired in May 2002 after a string of injury-filled seasons. His 462 career home runs rank him 26th on the career list.

After years of denial, Canseco admitted to using anabolic steroids, which many people had suspected for years. When he made his admission he claimed that most major league baseball players also took steroids, a claim that most people doubt. 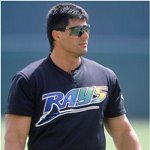