During John Harbaugh’s first season (2008) as the Ravens’ head coach, he would often thank those in the organization who were instrumental in hiring him. He would say: “Thanks for this opportunity. This is the best. I love everything about this job. I won’t let you down.”

Certainly, he let no one down. Taking over a team that produced a 5-11 mark in 2007, Harbaugh guided the ’08 Ravens to the AFC Championship game where they lost a heart-stopping battle to the eventual Super Bowl Champion Steelers. He tied the NFL record (since 1978) for turnarounds for head coaches taking over a sub-.500 team when Baltimore earned an 11-5 regular season mark. The Ravens’ 2-1 playoff record established a new league standard in this same category.

With the 13 total victories, Harbaugh set the NFL record for the most wins ever by a rookie head coach playing a rookie quarterback (Joe Flacco).

The Ravens did all this despite placing 19 players on Injured Reserve, the second most in the league. Baltimore lost 64 games to starters, according to Rick Gosselin of The Dallas Morning News, 14 more than any other ’08 playoff team.

Harbaugh, who established a reputation as one of the NFL’s top special teams coaches, is the third head coach in team history, following Ted Marchibroda (1996-98) and Brian Billick (1999-2007). Coach Harbaugh arrived in Baltimore with 24 years of pro and college coaching experience, including the previous 10 seasons with the Philadelphia Eagles. John was the Eagles’ special team coach from 1998 through 2006 and headed Philly’s secondary in 2007. He was originally hired by then-head coach Ray Rhodes and, subsequently, was one of four assistants retained by Andy Reid in 1999.

Prior to hiring John, the Ravens talked with over 30 people about the energetic Harbaugh, who had never been a head coach, nor an NFL offensive or defensive coordinator. “Did we take a chance by hiring John? My belief is that you have to be willing to do things the masses don’t, or you’ll never separate yourself from the masses,” stated team owner Steve Bisciotti. “We’re totally confident we picked the right person.”

Harbaugh’s Philadelphia special teams were consistently ranked among the NFL’s best. From 2000-05, Philly’s units finished in the top 10 in five of those seasons in the comprehensive special teams rankings. In 2001 and 2003, the Eagles were ranked No. 1 according to the Rick Gosselin composite (includes 22 kicking-game categories). Following the 2001 season, Harbaugh was voted the NFL’s Special Teams Coach of the Year by his peers. He was also named The Dallas Morning News Coach of the Year that season. In just four years (1998-2001), Harbaugh elevated the Eagles’ special teams units from 29th to first in the league.

In 1999, the Eagles signed K David Akers, who had been working as a part-time waiter after brief kicking stints with Carolina, Atlanta and Washington. With Harbaugh’s help, Akers became a three-time Pro Bowler. Harbaugh also worked with P Dirk Johnson, another “street” free agent, helping him record the top two net punting averages (38.4 in ’05 and 37.4 in ’04) in Eagles history. Under coach Harbaugh, 15 Eagles earned Special Teams Player of the Week awards, snapper Mike Bartrum was named to the Pro Bowl, and RS Reno Mahe led the NFL with a 12.8 punt return average in 2005.

Harbaugh, a graduate of Miami (Ohio) – where he played defensive back – is from a football family. His father, Jack, is a 41-year coaching veteran who won the 2002 NCAA Division I-AA football championship as the head coach at Western Kentucky. His brother Jim, who was the Ravens’ starting QB in 1998, played 14 seasons in the NFL and is the current head coach at Stanford. (His sister Joani is married to Indiana basketball coach Tom Crean.)

Among John’s 24 years of coaching is a two-year stint as the assistant head coach at the University of Cincinnati (1995-96). (The Bearcats finished 6-5 both seasons.) John coached 10 years on offense and four on defense at the college level, launching his coaching career in 1984 at the age of 21 as a graduate assistant for his father at Western Michigan. In his second position at the University of Pittsburgh (1987), he was mentored by the legendary Sid Gillman, the Pro Football Hall of Famer. John coached the TEs at Pitt under head coach Mike Gottfried.

While at Cincinnati (1989-96), Harbaugh coached special teams, TEs, OLBs, RBs and was also the recruiting coordinator. Over eight years, John recruited 27 starters for the Bearcats, and tutored both the NCAA’s top return man (former Raven Robert Tate, 34.3 KOR avg. in ’95) and the second-ranked returner (Chris Hewitt, 31.5 KOR avg. in ’93). John was part of a staff that helped Cincinnati produce three out of four winning seasons (1993, 1995-96) for the first time in 20 years.

“Harbs” also coached one season at Indiana in 1997 as the DBs coach/special teams coordinator under Cam Cameron, the Ravens’ current offensive coordinator, and one year at Morehead State in 1988 as DBs/special teams and strength and conditioning coordinator. Harbaugh earned a degree in political science at Miami (OH), where he won the Football Scholar Athlete Award. He earned his master’s in physical education at Western Michigan. John, who attended Ann Arbor (MI) Pioneer HS, his wife, Ingrid, and their daughter, Alison, live in Reisterstown, MD. 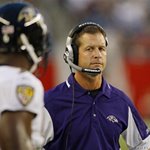