Fiona Gelin was born on May 22, 1962 in Boulogne, France. She is a famous actress. She is the daughter of Daniel Gelin. Fiona started her career as an actress with the famous television series "Une mere Russe" which was released in 1981.
She acted in the television series "Esprit de famille, La" in which she played the role of Nicole in 1982. 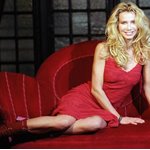