Holyfield was considered the favorite to win the light-heavyweight championship at the 1984 Olympics, but was the victim of one of the controversial decisions that plagued boxing at the Seoul Games. He had apparently knocked out his opponent in a semi-final bout, but the referee ruled the punch had been thrown after the bell, and Holyfield lost on a questionable decision.

He became a professional after the Olympics and won the WBA and IBF junior heavyweight (cruiserweight) championships on July 12, 1986, with a decision over Dwight M. Qawi in Atlanta. Holyfield added the WBC junior heavyweight title by knocking out Carlos DeLeon in the 8th round on April 9, 1988.

Holyfield became world heavyweight champion with a 3rd-round knockout of Buster Douglas on October 25, 1990. He was then scheduled to fight Mike Tyson, who had been upset by Douglas, but the fight was postponed when Tyson suffered an injury and then canceled entirely after Tyson's conviction for rape.

After three defenses, Holyfield lost the title to Riddick Bowe in a unanimous decision on November 13, 1992. It was his first loss in 29 professional fights.

Holyfield reclaimed the championship with a 12-round decision over Bowe on November 6, 1993, but lost it to Michael Moorer on a decision the following year.

He got his long-delayed fight with Tyson on November 9, 1996, and won the WBA version of the title by knocking Tyson out in the 11th round. He held onto it in a 1997 rematch when Tyson, clearly losing, twice bit Holyfield's ear and was disqualified in the third round.

Holyfield took a big step toward unifying the heavyweight title by knocking out Moorer in the 8th round on November 8, 1997, to win the IBF title. He faltered on the next two steps, however. His attempt to win the WBC title from Lennox Lewis failed when they fought a 12-round draw in March of 1999. In November of that year, Lennox won a decision in the rematch to unify the championship.

In 2000, Lewis won back a piece of the title by decisioning John Ruiz, who had become the WBA titlist in the meantime. However, he lost it in a rematch with Ruiz in March of 2001, and they fought a draw in December, allowing Ruiz to hang onto the title.

When Lennox Lewis refused to fight Chris Byrd, the No. 1 International Boxing Federation challenger, the IBF stripped him of his title and chose Evander and Byrd to fight for the championship on Dec. 14, 2002. Holyfield tore the rotator cuff ligament in his left shoulder in the first round, but continued to fight. He lost a 12-round decision.

His most recent bout was a contest against cruiserweight champion James Toney on Oct. 4, 2003. Toney won when Holyfield's trainer threw in the towel during the ninth round. Holyfield had just managed to struggle to his feet after being knocked down by a whole series of puinches.

Through 2003, Holyfield has won 38 professional fights, 25 by knockouts. He has lost 8 and fought two draws. 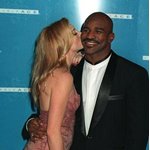 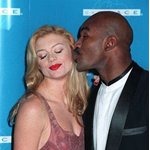 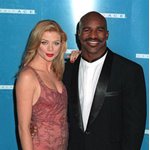