Born in Leicester, England, Dominic Keating's early stage performances led his instructors to single him out as a "bright, young hope." Nevertheless, his major studies at the University College in London earned him a B.A. with honors in history, not theatre arts. But Keating kept the acting flame alive through the academic years, participating in several University productions and pondering an eventual leap into the professional theatreMost recently Keating finished filming Beowulf (Old Cain) and Hollywood Kills (Francis Fenway). He starred in the feature film "Jungle 2 Jungle" (Ian) opposite Tim Allen and Martin Short. He also appeared in the Oscar-nominated feature film "Almost Famous" and starred with Raquel Welch in "What I Did for Love." In "The Hollywood Sign" (Steve) he plays his first American role opposite Rod Steiger, Burt Reynolds and Tom Berenger.

His television credits include a lead role on Star Trek: Enterprise (Lt. Malcolm Reed), and on Glory Days, a series regular for five years on Desmond's (Tony), recurring roles in The Immortal (Mallos) and G vs E, plus guest appearances on Special Unit 2, Buffy the Vampire Slayer and Poltergeist: The Legacy, and a guest appearance on Las Vegas (Anthony Denvy).His stage credits include University productions of "Life Class" and "Rosencranz and Guildenstern are Dead." He won an award for Best Actor on the Fringe for his role as Cosmo in "The Pitchfork Disney" at the Bush Theatre in London. He also starred in the one-man play "The Christian Brothers" in King's Cross and in "The Best Years of Your Life" at the Man in the Moon Theatre in Chelsea. He was awarded the Mobile Prize for his performance in "Amongst Barbarians" at the Royal Exchange in Manchester, which then transferred to the Hampstead Theatre in London. Other performances include roles in "Screamers" at the Edinburgh Playhouse Festival and in "Alfie" at the Tiffany Theatre in Los Angeles. 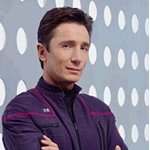 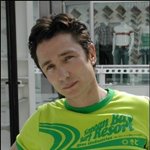