A Change Of Pace Bio - Biography

The rock & roll dream is alive and well and living in Peoria. That’s Peoria, Arizona, a small town outside Phoenix, where the members of A Change of Pace, ages 16-18, come from. Unlike most teenagers who have just graduated high school, they are not busy getting ready for college, but about to release their slam-bang debut album, An Offer You Can’t Refuse, for Immortal Records.

“It’s kind of uncanny isn’t it?” says lead singer Torry Jasper about the band’s youth. Their age is belied by the sheer energy and roar behind such tracks as “Loose Lips Sink Ships,” “Till Death Do Us Part,” “Every Second” and “Asleep at the Wheel,” which combine the bludgeoning martial synchronization of hardcore metal with surging buzzsaw choruses that nod to both emo and punk.

The influences range from the Beatles, Black Sabbath and Led Zeppelin albums Torry’s parents played around the house, through his Metallica phase and up to his current fascination with Five for Fighting, Ben Folds and Third Eye Blind, reflected in the hard-edged acoustic lament, “A Farewell to Friendship.”

A Change of Pace’s roots go back to Torry and Jonathan Kelly’s freshman high school English class four years ago, where they first met and discovered their mutual love of music. Unfortunately, when they got together to jam, they discovered they couldn’t stand each other, though they hit it off musically.

“We wrote one song and it was horrible,” remembers Torry. “But we kept at it, continued writing and writing until we got it right.”

“It takes time to get used to Torry,” laughs Kelly. “At first, it’s like, what is this guy doing? After awhile, you just fall in love with him. When I first found out he played guitar, we’d play together every night for hours and hours. Our friends would come over and check us out. And it just went from there.”

They played some local gigs, but it wasn’t until bassist Johnny Abdullah and lead guitarist Adam Rodgers came aboard about 18 months ago that A Change of Pace started to take off.

The group recorded some tracks locally and placed them on MP3.com, where they were discovered by L.A.-based artist manager Jorge Hernandez, who had begun browsing the site at the letter “A” and rang the band up to find out who they were.

“As A Change of Pace, we were one of the first names on the list,” marvels Jonathan at their stroke of good luck.

Within months, the band was signed to Immortal Records, original home of Korn and Incubus, among others, and in a Las Vegas studio recording their bow with producer Michael “Elvis” Baskette (Incubus, Three Days Grace, Chevelle).

“That was a whole new experience for us,” admits Jonathan. “Elvis helped us with the writing and the arrangements. It was great to be with someone who knew so much about music.”

Torry, who writes most of the band’s lyrics, and comes up with the music with the rest of the band, is the source of much of the fury, anger and scorn in A Change of Pace’s music.

“He’s been through a lot of stuff,” says Jonathan. “He has a lot of problems with that. Just going through high school, growing up. He’s a strange guy. I was a little afraid of him at first. But once you get to know him, he’s great. ”

“Loose Lips Sink Ships” and “A Farewell to a Friendship” wear their feelings of betrayal. “That’s just how my friendships have been for the last few years,” explains Torry. “It just seems everybody outside the band is kind of unfaithful in some way or form. Doing stupid things behind each other’s backs.”

The cinematic “Every Second” and the crash-and-burn “Asleep at the Wheel” express feelings of emotional turmoil through their tales of drunk driving and car accidents, while “Till Death Do Us Part” is about ripping a girlfriend’s heart out and smashing it up against a wall.

“That’s how I think about stuff sometimes,” Torry says about the latter. “Once you get tossed around enough in a relationship, you can’t take it any more. You have to lash out. I’ve been through a lot of things. I’ve learned a great deal during these past four years of high school.

“I write about things that happen around me, but I take a perspective that not everybody else has. I guess I think a little differently.”

And now the boys are ready to graduate into the real world of rock & roll touring… and they couldn’t be more thrilled. The group’s live show is propulsive. Adam spins the guitar 360 degrees around his shoulder, Torry bends over backwards spewing liquid from his mouth, Jonathan falls all over his drum kit, Johnny bounces up and down like a jack-in-the-box, adding his back-up vocals to the rockin’ maelstrom that is A Change of Pace.

“Live shows are a lot of fun,” says Jonathan. “We’ve been asked to tone it down, though. We end up breaking stuff and getting ourselves hurt. We like to put on a show.”

And while the guys have considered college, those plans are on hold for now. “My goal was for this to happen before high school ended, so I didn’t have to go to college,” admits Jonathan. “College will always be there. For us to have a chance like this right now, it’s something we can’t pass up,” says Torry, who had originally intended to go to school and play soccer. “I just want to be able to make a living playing music. That’s the goal for all of us.”

“Our families are all real supportive of the band and what we’re doing,” adds Jonathan. “We were friends before we were a band. We’d be hanging out together even if we weren’t in this group.”

Take A Change of Pace. It’s An Offer You Can’t Refuse.

A Change Of Pace Photos 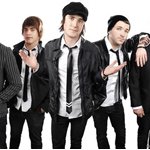