Tyler was born in Santa Monica, California and currently lives in Santa Clarita, California with his mom, dad and two brothers, Jesse and Derek. His heritage is Irish, English, Mexican and French. He developed an early interest in the art and began his acting career performing on stage with his actor/writer dad, at the age of six. He has worked steadily in both TV and film since the age of eight and has enjoyed traveling all over North America and Mexico as a result. He has had the opportunity to work with some of the most talented people in the business and has learned from them all.

Tyler is also a singer/songwriter, plays lead and bass, fronts a band in Santa Clarita and will continue to pursue acting, writing and music as a career. 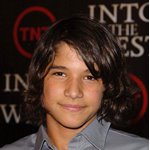