Arakawa was born in Shinagawa, Tokyo, Japan, and grew up in Sendai, the largest city in the Tohoku region. She is the only child of Koichi and Sachi Arakawa. Her current coach, Nikolai Morozov, is a former figure skater from Belarus. Her previous coaches were Tatiana Tarasova and Richard Callaghan. She was also coached by the 1994 world champion Yuka Sato's mother, Kumiko Sato, at one time.

Arakawa landed her first triple-jump, a salchow, when she was 8 years old. She competed in the 1998 Winter Olympics in Nagano in 1998, at the age of 16. Her favorite jump is the toe loop. The double axel jump is the hardest for her. She enjoys skating to classical music like Tchaikovsky's Swan Lake and James Horner's Titanic soundtrack. Arakawa explained, "I like to skate to music with a story. Something big that I can skate to. If you compare skating to ballet, there's a story you have to follow in ballet. But in skating, I can tell my own story by performing whatever feels best with the music."

At 5 feet 6 inches, Arakawa is one of the tallest ladies' skaters and is known for her spins and jumping ability, particularly her difficult triple-triple combinations. In 2004, she added a Biellmann spin to her repertoire. The Biellmann requires exceptional back flexibility. It took Arakawa about five months to learn this move. She is known also for exceptional skating quality, seemingly effortless cross overs, and gaining speed with ease. Her trademark move is the Ina Bauer, Arakawa's interpretation of this move putting her in a full backbend.

Arakawa graduated with a Bachelor's degree in social sciences from Waseda University in Tokyo in 2004, while still competing in competition. She won her world championship title days after completing her graduation examinations at Waseda. She currently lives and trains at the International Skating Center of Connecticut in Simsbury in the United States after the closure of the Konami Sports Ice Rink in Sendai, where she began her career.
Arakawa cites gourmet cooking as one of her hobbies. She collects beanie babies, has a pet shih tzu (named Charo) and hamster (named Juntoki). 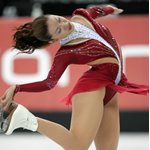 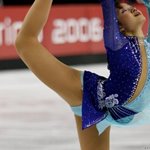