Okay, so she had a little help—talented writers, directors, and costars. But basically that classic, independent, funny, vulnerable character, Sally Rogers of The Dick Van Dyke Show, was the creation of Rose Marie, the actress who gave Sally life and turned millions of viewers into her personal cheering section.

Her work on that series earned her three Emmy nominations, which she attributed to her experience of having been a performer since the age of 3. As "Baby Rose Marie," at the age of five she was signed by NBC to star in her own coast-to-coast radio show. At the age of seven she was sent on the road by NBC just to prove that her deep adultlike voice did indeed belong to a child. In 1933 she appeared in her first film, International House with W.C. Fields.

At age 11 she dropped the "Baby" and continued her career as Rose Marie. As a teenager, the husky-throated young lady became a headliner at leading nightclubs across the country, from New York's famed Copacabana and Latin Quarter to the Las Vegas Strip where, with Jimmy Durante and Xavier Cugat, she opened the first luxury casino-club, The Flamingo. The years that followed found Rose Marie a regular headliner in Vegas, where she played the Riviera Hotel, Sahara, Thunderbird and Harrah's in Reno and Tahoe.

Gathering a wealth of show-biz knowledge from working with the greats of comedy and song, Rose Marie became expert in comedic delivery herself. She interrupted her singing career long enough to gain great critical acclaim on Broadway as costar with Milton Berle in Spring in Brazil, Zero Mostel in Lunatics and Lovers, and Phil Silvers in Top Banana. She followed this up by touring with the national touring companies of Call Me Madam and Bye Bye Birdie.

The film version of Top Banana brought Rose Marie back to motion pictures. (As a child star she made numerous musical shorts and comedy films.) She appeared in Memories of Us, Dead Heat on a Merry-Go-Round, The Man from Clover Grove, Lunch Wagon, Cheaper to Keep Her, and Dick and Jane.

When situation comedy began to emerge on television, Rose Marie was there. She created running roles on The Bob Cummings Show, My Sister Eileen, The Doris Day Show and S.W.A.T., not to mention her own series in Honeymoon Suite. But it is for her costarring role in the classic comedy The Dick Van Dyke Show that Rose Marie is most remembered. Here, she portrayed the first "woman in a man's world"—the independent, Sally Rogers. She received three Emmy nominationsfor this role.

Most recently Rose Marie has returned to the night club-concert hall circuit across the country, appearing in the highly successful revue 4 Girls 4 along with Rosemary Clooney, Helen O'Connell, Margaret Whiting and later, Kay Starr.

Rose Marie's roles usually portray her as a husband-hunter, but she was very much married for twenty years to the late Bobby Guy, first trumpeter for the NBC Orchestra. She still lives in the same home she and Bobby moved into over 30 years ago in the San Fernando Valley, California. She is a celebrated Italian cook, a collector of plates, and a tireless defender of numerous humanitarian causes, notably animal welfare.

"I play me in almost everything I do," Rose Marie admitted. "I play a part to the best of my ability to get a joke out, to sell it, and to do it best." As the veteran comedy writer Sally Rogers, Rose Marie earned three Emmy nominations on "The Dick Van Dyke Show." She played a realistic version of the aging man-hunter, her wisecracks helping preserve her dignity as she dated a wide assortment of doubtful contenders.

Occasionally an episode allowed her to do a bit of song and dance which she handled with the enthusiasm of a female Jimmy Durante. Younger viewers had no idea that it was in just this mode -- hip, aggressive and jazzy, that she first achieved her fame. She was called "Baby Rose Marie" back then.

Discovered by a talent scout while singing on a beach in Atlantic City, she was brought to radio in 1927 to sing "What Can I Say, Dear, After I Say I'm Sorry." She had her own NBC radio show in 1930 and remained on the air, co-starring on a 1936 variety show on WHN in New York with Al Shayne. Her father, a Broadway and vaudeville star who worked under the name Frank Curley, helped her learn her songs.

Unlike sugary child stars of the day, Rose Marie sang fast paced blues songs using startlingly adult phrasing and mannerisms. The rollicking little girl in the Dutchboy bangs can be seen doing her stuff in the W.C. Fields' comedy "International House." She was so good some people insisting she had to be a midget in disguise.

Rose Marie "retired" in her teens but staged a comeback in the late 40's. She guest starred on Morey Amsterdam's early TV show, appeared in "Top Banana" with Phil Silvers in 1951 and played New York nightclubs. In the clubs she mixed one-liners about the town ("Where else can you wake up and hear the birds coughing?") with novelty tunes like "I Wish I Could Sing Like Durante" and "Be a Beggar, Be a Thief -- Be Anything But Please Don't Be Mine." She toured the country with the act, made some films, but won major new-found fame as the slightly cynical, and amusingly pushy Sally Rogers on "The Dick Van Dyke Show." Many episodes revolved about her attempt to get a husband. Tragically, her own husband, Bobby Guy, died in 1964 of a blood infection. They'd been married 19 years and had a daughter, Georgiana. "We were a little too close," said Rose Marie. "When I lost Bobby, I lost half my life."

Somewhat typed as the aggravated spinster with a rueful glare and frowning mouth, she continued to gest on sitcoms and became a regular on "The Hollywood Squares" quiz show with grim answers to dumb questions:

"True or fale, according to "The Magazine of the Midlands," the average wild hippo is really quite gentle."
"In that case -- I'm available."

"Is it ok to freeze mushrooms?"
"What else do I have to do?"

"According to experts, what is the best thing you can do to slow down the process of aging?"
"Lie."

In the 80's, Rose Marie returned to her old forte -- singing. She joined the "4 Girls 4" touring show with co-stars Margaret Whiting, Rosemary Clooney and Helen O'Connell. In December of 1990 she played the fairy godmother in a West Coast revival of Rodgers and Hammerstein's "Cinderella" co-starring Steve Allen and Jayne Meadows as the King and Queen. Sitcom fans were delighted to have her back in guest spots on "Murphy Brown" in 1991. 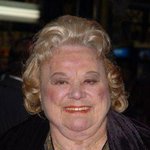 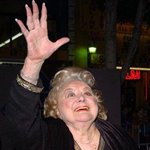