Her unique style is perhaps best represented in her signature song, the wrenchingly beautiful ballad "Llorando", a Spanish-language version of Roy Orbison's "Crying," which strongly evokes both her Latin roots as well as such vocal influences as Patsy Cline, Linda Ronstadt, Vikki Carr, and Karen Carpenter. In 1994, on the strength of that song, Rebekah moved to Nashville where she was signed to Irving Azoff's label, Giant Records.

Rebekah opened for Rod Stewart at the 25th Annual WEA convention, and cut her first album, called "Nobody's Angel." The title track was released on a compilation album for WEA, and the single shot to #2 in Holland. Ms. Del Rio then went on to do a recording project for James Stroud at DreamWorks’ Nashville Label. Then she was cast as a principal character in “The Next Big Thing”.

Before moving back to Los Angeles, David Lynch cast her as herself in his nightmarish hymn to L.A., Mulholland Drive. Her noteworthy performance has been universally praised as "a dazzling star turn," by John Powers in the L.A. Weekly, to "uniquely twisted," and "utterly enthralling," by Gregory Weinkauf from the New York Times.

In a Village Voice interview, Lynch describes his partnership with Rebekah as a "happy accident".
“Working with David is like a dream”, says Rebekah of her experience with the famous Director. Rebekah has written a song with Mr. Lynch and has worked with the ‘Master of Strange’ on an Internet series called ‘Rabbits’, opposite Naomi Watts.

Ms. Del Rio was received with a standing ovation at the 12th Annual Rainforest Foundation Benefit Concert at Carnegie Hall April 2002 after singing “Llorando” a capella. Rebekah was joined by Sting, Sir Elton John, & James Taylor clad in sombreros and maracas while she sang “La Bamba” for a tribute to the 60’s.

Ms. Del Rio sang with the Royal Philharmonic in England for thousands of fans and performed at The Sabera Foundation Fundraising Event. 2005 will present Ms. Del Rio's talents in yet another award winning film, Quattro Noza by Joey Curtis.

Rebekah has lent her voice to many charity functions and events that cultivate and bring awareness to Women’s & Children’s rights, Gay Rights, as well as the Latino Community. She was highlighted in the celebration for Salvador Dali’s 100th birthday gala at the Los Angeles Museum of Modern Art, the Maravilla Celebration at the National Hispanic Cultural Center in Albuquerque, New Mexico as well as being featured at the Los Angeles Conservancy’s “Last Remaining Seats” program where she was given a standing ovation for her performance at the Historic Orpheum Theatre in downtown L.A.

With the release of her most current album, “All My Life, Toda Mi Vida”, Rebekah has had more opportunities to work with other artists and on many film projects such as the new Robert Rodriguez film, “Sin City”. She has recently recorded a song on Michael Brook’s new Album and will be featured on Vista LA in May 2005.

Rebekah is currently writing for her Nashville/Los Angeles based Music Publishing Company, Baja Basement Music, and is represented by Brian Loucks at Creative Artists Agency. 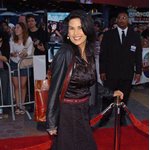