Pilar Montserrat Lastra (born January 15, 1981 in Monterey Park, California) is currently working for Playboy. She was born to a Mexican mother and Spanish father. She spent her childhood in San Antonio, Texas and graduated from Tom C. Clark High School in 1999. She was heavily involved in the ROTC program and also ran track at Clark.

At the age of 19, Lastra moved to Los Angeles to pursue a career in acting. After three lean years, she finally made her acting debut in the DVD comedy "Malibu Spring Break".

After firmly positioning herself for some time as an 'anti-nudity model', she signalled that she had renounced this stance when Playboy unveiled her as its Playmate of the Month for August 2004.

Lastra however soon indicated she was not intending to go in the nude again and confirmed her decision shortly after Tiffany Fallon was chosen for Playmate of the Year.

She appears as one of the caseholders on the popular NBC game show, Deal or No Deal. When the show began, she held case #26 and then #8, but now she holds case #14. In April 2006, Lastra and the other 25 models fromDeal or No Deal were listed as a whole in People magazine's annual 100 Most Beautiful People.

She also is working for Sirius Satellite Radio hosting The Playmate Hour on Playboy Radio (with Miriam Gonzalez who was Playmate of the Month for March, 2001), and wrote one of the chapters of a serialized novel on the Sirius website (along with other Sirius talent) called, "Naked Came the Summer."

About posing for Playboy despite anti-nudity principle: "I figured I should do nudity the right way, not in some cheesy, raunchy film" 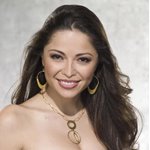