Raised in Los Angeles, Paula Patton has been pursuing her dreams of becoming an actress ever since she was a little girl. Having grown up in the entertainment capital of the world, Paula began preparing for a career in the business while still in high school. Paula’s teen years were spent at the prestigious Hamilton School for the Performing Arts, where the would-be performer spent hours honing her craft. After graduating, Paula received the opportunity of a lifetime when PBS selected her as one of four young filmmakers to participate in a program called The Ride, in which she was given access to equipment and a small crew, and told to film her experiences with other youths across America.

Paula eventually grew tired of toiling behind the camera and decided to sign herself up for acting classes. She consequently began the arduous auditioning process, finally landing her first role opposite Will Smith and Eva Mendes in 2005’s Hitch. She followed that up with a small part in the little-seen drama London (also released in ’05 and featuring Chris Evans, Jessica Biel and Jason Statham), and appeared alongside OutKast boys Andre Benjamin and Big Boi in Idlewild (2006). 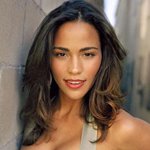