Palmer as Bianca in EastEnders Ricky and Bianca (2002).In 1993 she was cast in the role of fiesty Bianca Jackson in BBC's flagship soap opera, EastEnders. A popular character, Bianca's on-off romance with Ricky Butcher (Sid Owen) captivated millions of fans and their on-screen marriage in 1997 drew one of the biggest soap audiences ever — more than 22 million.[6] She remained in the role for six years, but quit in 1999 to spend more time with her family and to concentrate on other projects.[7] She reprised the role in May 2002 in a special spin-off entitled, EastEnders: Ricky and Bianca. The two part, hour long special was filmed in Manchester and reuinted Bianca and Ricky for the first time in over two years.[8]

Her notable roles since EastEnders have been as Clare in the detective series McCready and Daughter and an appearance in He knew he was right for the BBC, the television mini-series Do or die, the one-woman musical Tell Me On A Sunday which toured the UK and played in London's West End, the lead role in a UK tour of the musical Steppin' out, the original West end run of Mum's the word and a role in We happy few by Imogen Stubbs which played a short run at the Gielgud Theatre.

Palmer stood in for GMTV's Lorraine Kelly, presenting her Lorraine Live section for a week in 1999, reporting from Miami on fashion, lifestyle, health and fitness.[9] She has also co-hosted Channel 4's Big Breakfast as a guest presenter for a week.

In 2005 Patsy took part in BBC's Strictly Come Dancing show, to raise money for the Children in Need fund. She has also made a cameo appearance with Catherine Tate's sketch show The Catherine Tate Show.

In February 2007, Palmer was a jury member on the BBC programme, The Verdict, where various celebrities ruled on a contemporary and controversial case, based on evidence and examples from real life.

Palmer's autobiography All of Me was released in the UK on 5th April 2007. In it she describes her ascent to fame, her struggle with addiction and how she has battled to overcome her problems.

In addition to acting, Palmer has set up her own company, Palmer Cutler, with a friend, selling beauty and self-tanning products. 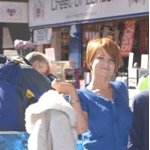