Pamela Prati was born on November 26, 1958 in Ozieri, Itlay. She is a famous actress. She is also known as Pamela Field. Pamela started her career as an actress with the famous movie "Moglie in bianco...l'amante el pepe, La" in which she played the role of Sonia in 1980. 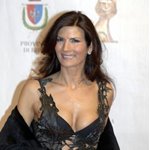