Osborne Earl "Ozzie" Smith (born December 26, 1954) is a retired American professional baseball player who played shortstop for Major League Baseball (MLB) teams the San Diego Padres and the St. Louis Cardinals. Nicknamed "The Wizard of Oz", Smith won the National League Gold Glove Award for defensive excellence at shortstop for thirteen consecutive seasons, a feat that, as of 2008, has not been equalled.[1] A 15-time All-Star, Smith accumulated 2,460 hits and 580 stolen bases over the course of his 19-year career, and also won a Silver Slugger Award in 1987 as the best hitter at shortstop for that season. Smith was elected to the Baseball Hall of Fame in 2002, his first year of eligibility.

Smith played his first four seasons with the San Diego Padres where he established himself as an outstanding defensive player who was known for performing backflips while running out to his position on special occasions. When turmoil with Padres' ownership developed, he was traded to the St. Louis Cardinals in 1982.[2] Smith was a major contributor to the Cardinals’ 1982 World Series championship and 1985 and 1987 National League championships. He hit a dramatic game-winning home run during Game 5 of the 1985 National League Championship Series and was named the 1985 NLCS MVP.

Smith retired after the 1996 season, and subsequently had his uniform number (#1) retired by the Cardinals. Since retiring Smith has worked in various broadcast-related positions and was host of the TV show This Week in Baseball from 1997 to 1999. 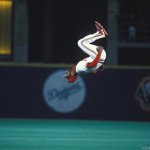 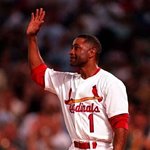