Remember the name because you won’t forget the face, or those eyes, or those one liners. In the land where blonde-haired, blue-eyed bombshells are as common as traffic jams and rhinoplasty, Nichole Hiltz is an uncommon denominator, a traffic stopper with a nose for the wisecrack, emphasis on wise. Behind all that, well, all that, is Hollywood’s next best thing, or better yet, best next thing.
Despite Nichole’s down to earth demeanor and tireless pursuit of not only her craft, but herself as a whole, Nichole’s success in showbiz isn’t a surprise to any who know her. She works hard and demands more of herself than anyone. Beauty and brains is not as easy as she makes it look. Upon first meeting Nichole, some may instinctually offer her a Ritalin smoothie. Her energy is not only consuming, it’s contagious. But you don’t want to "cure" Nichole.
Originally from a small town outside of Boston with no concept of A-lists or Z-3’s, Nichole has come a long way to make her mark on Hollywood, and she’s barely getting started. The only daughter of a poor, blind sharecropper, just kidding. By showbiz standards, Nichole’s beginnings were humble. A self-made person by choice, Nichole’s work ethic was evident long before she landed in LA. She had to pay her rent before she could pay her dues, so waitressing her way through high school (where she was class president 3 times) bartending, and programming computers took care of the bills. And then some guys named the Farelly brothers pulled a fast one, "discovered" Nichole, and off to the land of movie star milk and honey she went.
In addtition to her role in the Farelly Brothers’ Shallow Hal, Nichole has appeared and starred in numerous films, both features and independents, worked with reknown actors including Jack Nicholson, Vincent Cassell, Juliette Lewis and Mike Meyers, guest-starred on several critically acclaimed television shows, including a recurring role on The Shield, The O.C., C.S.I., and performed live theater and comedy. Forced to sit still at times, Nichole’s been featured in several magazines including STUFF, RAZOR, and PLAYBOY. Somewhere in between all of that, she managed to buy her own home, and become a landlord.
Nichole Hiltz will not wait for opportunity to knock on her door, or for you to keep up with the conversation. She’s kicking down Hollywood’s doors, stealing scenes, taking names, and leaving the feeble-witted quivering with a confusing combination of self-doubt and infatuation, except her cats, one of which she walks on a leash. Despite those catty influences, she remains as approachable as anyone in Hollywood. 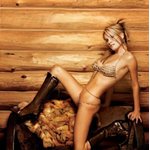 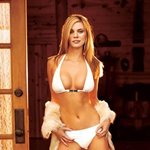 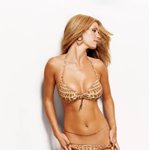