Natalie Cole was born the second of five children on February 6, 1950 to the legendary singer Nat "King" Cole and his wife Maria Cole (who, before her marriage to Nat, was a singer with the Duke Ellington Orchestra). Natalie (who's nickname is Sweetie) was raised in the elegant Hancock Park district of Los Angeles, California. Music was a big part of her childhood – different kinds of music that also included jazz and rock. Since her Dad was on the same label as the Beatles, he would bring home their latest albums and would also bring those of Ella Fitzgerald and Billie Holiday. Natalie made her singing debut at the age of six on her Dad’s Christmas album. He had given her a tape recorder which she used to tape herself singing a few of Ella’s tunes at age 11. After hearing Natalie’s voice on the tape and being amazed, Nat asked conductor Nelson Riddle to write her into a song in his nightclub act. She performed for a week because she was in school, but it was her first paying job. Nat "King" Cole died of lung cancer when Natalie was 15 years old.

After Nat "King" Cole’s death, Maria Cole and her children eventually moved to Massachusetts. Natalie was into listening to the rock-‘n’-roll music of singers such as Janis Joplin and the Jefferson Airplane. Natalie enrolled at the University of Massachusetts at Amherst. When she started at the University, she originally wanted to be a physician. At some point, she hooked up with a band in Amherst as lead singer and they played jazz as well as rock. The one thing that bothered her was that club owners would sometimes bill her as Nat King Cole’s daughter. She received a B.A. degree in child psychology from the University of Massachusetts in 1972 and continued performing. She increasingly won more distinctive venues. She developed her own style, which included the gospel flavor and rhythm-and-blues styles.

Chuck Jackson and Marvin Yancy (two Chicago-based songwriters and record producers) caught her act at Mister Kelly’s nightclub in Chicago. They liked the range of her talent and took her into the studio to record a demo tape. They began writing original compositions that fit her voice. They contacted the major record labels to obtain a recording contract for Natalie. However, it was Capitol Records, the label Nat "King" Cole had recorded for, who offered Natalie a contract. In 1975, Natalie Cole made her debut album, Inseparable. She took the music industry by storm. Two hit singles resulted which were "Inseparable" and "This Will Be." (Click here for the lyrics to "This Will Be.") Natalie earned a gold record and in 1976 won two Grammy awards. One of the things that I remember the most is how Natalie was compared so much to the singer, Aretha Franklin among others.

Her follow-up album, Natalie, in 1976 yielded the hit single "Sophisticated Lady" from which she won another Grammy award. Also, "Mr. Melody" was a top 10 single. Natalie just couldn’t lose with the stuff she used (smile); she is such a gifted songbird. She has worked very hard in her career. Natalie and Marvin Yancy also got married in July of 1976. Capitol Records released Natalie’s third album, Unpredictable, which was a million seller and contained the hit single "I’ve Got Love On My Mind." Natalie gave birth to her son, Robert Adam Yancy, in October of 1977. From what I could gather, Thankful was released in November of 1977 which went platinum and yielded the hit single "Our Love." (Click here for the lyrics to "Our Love.") I remember watching her television special that aired in 1978 and included the group Earth, Wind & Fire among others. In the summer of 1978, Natalie released Natalie…Live which is a two-record set. Ms. Cole (along with Chaka Khan) is also featured singing background vocals on Stephen Bishop’s Bish album of 1978 (ABC Records) on the song "A Fool At Heart." I Love You So was released in 1979 which contained the hit singles "Stand By" and "Sorry." Natalie also received a star on the Hollywood Walk Of Fame in 1979! "Go Natalie!"

Down But Not Out!

After Natalie's collaboration with Peabo Bryson on We’re The Best Of Friends in 1979 which also went gold, she had a less successful period. Natalie’s drug and alcohol use became heavy and eventually took a toll on her career. Don't Look Back, of 1980, yielded the single "Someone That I Used To Love." Her album, Happy Love was recorded without Marvin Yancy. Although they reunited for the I'm Ready album, they eventually divorced but shared responsibility of care for their son, Robbie. In 1982, Natalie entered a drug rehabilitation clinic and stayed for 30 days. However, she was soon after abusing drugs and alcohol again. She became incapable of handling her own affairs and her mother was named conservator of her estate. Natalie also had an operation to remove throat polyps. Later in 1983, Natalie entered a drug-treatment center in Minnesota. Among other things, she learned to admit that she had a problem and that she needed help. She finally won her fight against the addiction. The program was strict and Natalie did not leave the hospital until May 16, 1984. Her album, I’m Ready, sold only about 40,000 copies. In 1985, Natalie suffered another setback when Marvin Yancy died of a heart attack.

How Sweet It Is!

In 1985, Dangerous, was released which sold just under 150,000 copies. However, Natalie was back on top with Everlasting in 1987. The three hit singles were "Jump Start," "I Live For Your Love," and "Pink Cadillac." She also sang "Over You" in 1987 with Ray Parker, Jr. Natalie is also featured on Deniece Williams’ Special Love album in 1989 as they collaborated on the gospel tune "We Sing Praises." Still yet, another successful album of Natalie’s was the release of Good To Be Back in 1989. It contained the top ten hit "Miss You Like Crazy" as well as "Someone’s Rocking My Dreamboat." Natalie married musician/producer Andre Fischer in 1989, but she was said to be going through a divorce from him some time in 1996. Natalie’s largest selling album to date is the release of Unforgettable…..With Love in 1991 (Elektra Records) which is a special tribute to her father that contains twenty-two of his classics. The album won seven Grammy awards. Natalie is such an incredible singer. Through technology, Natalie sings with her father on the album in a duet of "Unforgettable." Click here for the lyrics to "Unforgettable". They are both unforgettable singers. Natalie’s follow-up album Take A Look (1993), although not as successful, also contains wonderful songs. She picked up another Grammy award for Best Jazz Vocal Performance for the title song.

Natalie's Christmas album Holly and Ivy (released in 1994) is so good that I find myself playing it even in the summer (smile). Natalie Cole's Untraditional Traditional Christmas special concert can be viewed on video. She sings the songs from Holly & Ivy on the special with such ease; it really is a great performance! One will really enjoy her delivery of every song, particularly Natalie's version of "Joy To The World." Natalie also had to endure the death of her brother. Stardust which was released in 1996, also contains a duet with her father entitled "When I Fall In Love" from which she also won a Grammy award. She also released a Christmas CD entitled Celebration Of Christmas (with Jose' Carreras and Placido Domingo) and sings the title track of "A Smile Like Yours" (1997) from the motion picture of the same name. Natalie released Snowfall On The Sahara in June of 1999! The album is a mixture of Jazz, Pop and R&B...actually, the album contains all of the different styles of music that Ms. Cole has performed over her twenty-five years in the music industry thus far! (Click here for the lyrics to the hit song "Snowfall On The Sahara.") She also recorded a new Christmas CD with the London Symphony Orchestra entitled The Magic Of Christmas; it was released in stores on October 19, 1999.

This Is My Story; And Still I Rise

Natalie's Greatest Hits Volume I was released on November 14th, 2000. She hand picked the songs herself. It contains songs such as "This Will Be," "Lucy In The Sky With Diamonds," and also contains two new unreleased songs entitled "Livin' For Love," and "Angel On My Shoulder." The latter song is the title of her autobiography which was released on November 7, 2000. The autobiography was co-authored by Digby Diehl, as well as Natalie Cole. It debuted at #1 on Los Angeles Times Bookseller list! Natalie received an NAACP Image Award in March of 2001 for her role in her movie Living For Love: The Natalie Cole Story! Then there's Ask A Woman Who Knows, Natalie's September 17, 2002 release, which is a great album! The album was released at a wonderful time in Natalie's life. She married Bishop Kenneth Dupree on October 12, 2001. Bishop Dupree is the Senior Pastor of the Victory Baptist Church in Tennessee. The happily married Songbird is not only the Mother of Rob, her son; she now has a stepson. The album, Ask A Woman Who Knows is full of jazzy tunes. It actually marks Natalie's switch from Elektra Records to Verve Records. It also marks her move to Jazz. With songs such as "Tell Me All About It," "Ask A Woman Who Knows, and "Better Than Anything" (a duet with Diana Krall), Natalie surely can't go wrong! One can hear Natalie's beautiful high range as she sings "Calling You." The album is so dynamic that it debuted at the #1 spot on the Jazz chart and also appeared on the Billboard charts. Natalie has been very busy promoting the album, and also looked and sounded great singing the National Anthem (acappella) at game 4 of the World Series! She's excellent with and without music; Natalie's a true Diva! 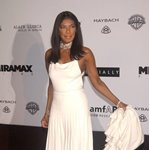 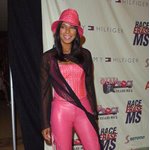 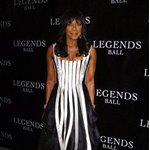 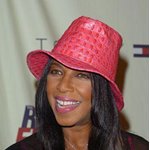 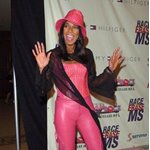 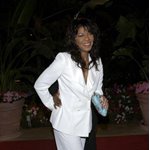 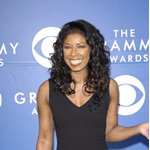 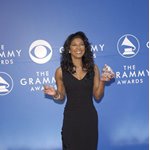