The daughter of a French pharmacist father and an Italian mother, she initially wanted to be a dancer. The circumstances of war made this difficult and her parents saw it as only a whim; however, her determination won through and she joined the "ballet-rats", as the dancers of the chorus are termed. She was soon advanced to soloist in the Nice Opéra. At 15 she met Maurice Chevalier, who predicted that she would be a success.

She moved to Paris aged 17, and first joined the troupe of Roland Petit, then the company of the "Ballets of the Eiffel Tower". Parallel to her career as dancer, Mercier studied acting under Solange Sicard. For her film début her birth name seemed too long and old-fashioned. It was suggested she take the name Michèle - which happened to be name of her younger sister, who had died at the age of five from typhoid fever. However, she adopted the name as a tribute to the actress Michèle Morgan.

After some romantic comedies and a small role in François Truffaut's Tirez sur le pianiste ("Shoot The Pianist", 1960), she worked in England and made some, mainly small-budget, films in Italy, usually playing women of easy virtue.

She needed a role which could make her a star. It was in 1963, when it was decided to make a movie of the sensational novel "Angélique", that Michèle got her chance. Many actresses were approached to play the role of Angélique. Producer Francis Cosne wanted Brigitte Bardot for the part. She refused. Annette Stroyberg was considered next, but judged not sufficiently well-known. Catherine Deneuve was too pale, Jane Fonda spoke French with an American accent, and Virna Lisi was busy in Hollywood. The most serious actress considered was Marina Vlady. She almost signed a contract, but Mercier won the role after trying out for it - she did not appreciate this very much since she was being treated like a beginner at a time when she was already well-known in Italy. At the time she was contacted to play Angélique, she had already acted in over twenty films. During the next four years she made five sequels which enjoyed astonishing success. However the role of Angélique, "the Marquise of the Angels", was both a blessing and a curse. It catapulted her to almost instant stardom, rivalling Brigitte Bardot in celebrity and popularity, but the character of Angélique overshadowed all other aspects of her career. By the end of the 1960s, the names Angélique and Michèle Mercier were synonymous.

Attempting to break free from the character Michèle played against Jean Gabin in The Thunder of God directed by Denys de la Patellière. She then appeared with Robert Hossein in La Seconde Vérité directed by Christian-Jaque. Mercier then left France and tried to re-start her career in the United States, unfortunately without much success.

After 14-year layoff she returned in the 1998 film La Rumbera, directed by Piero Vivarelli. In 1999, having been swindled out of several million francs in a business venture, Mercier had serious financial problems. She even planned to sell the famous wedding gown of Angélique. The actress confessed in Nice Matin: "I am ruined, I'll be obliged to sell part of my paintings, my furniture, my properties, my jewels and the costumes of Angélique". In 2002 at the Cannes Film Festival she presented her second book of memoirs. Mercier was made a chevalier dans l'Ordre des Arts et des Lettres on the 6th of March 2006. 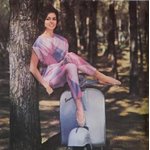 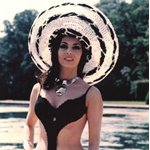 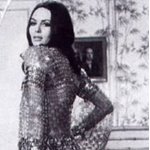