Matt was born in Los Angeles, California. At an early age his parents took him to Italy, where he spent some of his childhood. Matt has studied acting under a variety of schools including Lee Strasberg Institute, Beverly Hills Playhouse and Tracy Roberts Actors Studio.


Borlenghi previously starred in the daytime drama series “All My Children”, where he was cast in the role of Brian Bodine opposite Kelly Ripa. In 1993 he won a Soap Opera Digest Award for Outstanding Younger Actor and was nominated for a Daytime Emmy in the same category that year. Matt has guest starred on “Pacific Blue,” and “Married with Children.” He has also appeared in the movies “The American Scream”, “A Nightmare On Elm Street: The Dream Child”, “The Crew”, “Spider’s Web” and “DinoCroc” to name a few.

Matt stands 5’11,” and has dark brown hair and brown eyes. He celebrates his birthday on May 25th. 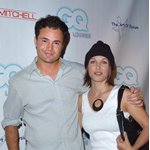