Kross was born and raised in Sacramento, California. She has described herself in high school as "the book nerd".[5] She began stripping at the age of eighteen at Rick's Showgirls in Rancho Cordova, California, to earn extra money to purchase a pony that was going to be slaughtered.[6] She was later contacted by an agent and started modeling in adult magazines.[7]

Kross was a senior at California State University, Sacramento, when she signed an exclusive performing contract with Vivid Video in November 2006.[7] Her movies with Vivid included Kayden's First Time, Hard Time, and Be Here Now. Unhappy with the company, she became a free agent one year later when she did not renew her contract.[5] After one month of being a free agent, she signed an exclusive contract with Adam & Eve.[7]

Kross has appeared in several episodes of The Block, a reality snowboarding show that aired on G4TV, in which the Vivid Girls went to The Block hotel for a photo shoot. She also appeared on the Gene Simmons' reality show, Family Jewels.[8] She was named Penthouse Pet of the Month for September 2008.[9]

Kross' official web site, ClubKayden.com, launched on September 2, 2008. Alongside a blog she hosts at UnKrossed.com, Kross writes regular updates and opinion columns for MikeSouth.com, an adult industry gossip blog, among other sites.[10]

Kross portrayed the role of Elin Nordegren in "The 8th Day" that went on to be Adam & Eve Pictures film Tiger's Wood. She says she would not have a sex scene with the film's male lead, Tyler Knight, who portrayed golfer Tiger Woods.[11] 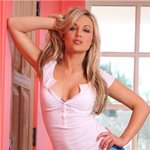