Poor Kathy Bates was forever losing out when her award-winning stage characters transferred to the screen. Unphotogenic and unattractive by Hollywood standards, she faced disappointment after disappointment as younger, prettier or more established stars usurped her New York stage triumphs in their adaptations to film. First Sissy Spacek takes on her potent role as the suicidal Jessie Cates in 'night, Mother (1986), then Michelle Pfeiffer seizes the moment to play her dumpy lover character in Frankie and Johnny (1991). It would take Oscar glory to finally rectify the injustice.

Kathleen Doyle Bates was born and raised in Memphis, Tennessee, the youngest of three daughters born to Langdon Doyle Bates, a mechanical engineer, and his homemaker wife Bertye Talbot. Kathy's great-great Irish grandfather, who emigrated to New Orleans, once served as President Andrew Jackson's doctor. She discovered acting appearing in high school plays and studied drama at Southern Methodist University, graduating in 1969. With her mind firmly set, she moved to New York City in 1970 and paid her dues by working everything from a cash register to taking lunch orders. She scored a tour-de-farce performance alongside Christopher Walken at Buffalo's Studio Arena Theatre in Lanford Wilson's world premiere of "Lemon Sky" in 1970 -- but she also had a foreshadowing of the heartbreak to come when the successful show relocated to New York's off-Broadway Playhouse Theatre without Kathy. Walken wound up winning a Drama Desk award.

By the mid-to-late 1970s Kathy was trotting the boards frequently as a rising young actress of the New York and regional theater scene. She appeared in "Casserole" and "A Quality of Mercy" (both 1975) before earning exceptional reviews for her role of Joanne in "Vanities". She took her first Broadway curtain call in 1980's "Goodbye Fidel," which lasted only six performances. She then went directly into replacement mode when she joined the cast of the already-established and highly successful "Fifth of July" in 1981.

Kathy made a false start in films with Taking Off (1971), in which she was billed as "Bobo Bates". She didn't film again until Straight Time (1978), starring Dustin Hoffman, and that part was not substantial enough to cause a stir. Things turned hopeful, however, when Kathy and the rest of the female ensemble were given the chance to play their respective Broadway parts in the film version of Robert Altman's Come Back to the Five and Dime, Jimmy Dean, Jimmy Dean (1982). It was a juicy role for Kathy and film audiences finally started noticing the now 34-year-old.

Still and all, it was the New York stage that continued to earn Kathy awards and acclaim. She was pure textbook to any actor studying how to disappear into a role. Her characters ranged from free and life-affirming to downright pitiable. Despite winning a Tony Award nomination and Outer Critic's Circle Award for her stark, touchingly sad portrait of a suicidal daughter in 1983's "'night, Mother" and the Obie and Los Angeles Drama Critics Award for her powerhouse job as a romantic misfit in "Frankie and Johnny in the Claire de Lune," Kathy had no box-office pull and was hardly a strong consideration when the roles finally went to film.

It was her fanatical turn as the drab, chunky, porcine-looking psychopath Annie Wilkes, who kidnaps her favorite author (James Caan) and subjects him to a series of horrific tortures, that finally turned the tide for her in Hollywood. With the 1990 shocker Misery (1990), based on the popular Stephen King novel, Bates and Caan were pure box office magic. Moreover, Kathy captured the "Best Actress" Oscar and Golden Globe award, a first in that genre (horror) for that category. To add to her happiness she married Tony Campisi, also an actor, in 1991.

Quality film scripts now started coming her way and the 1990s proved to be a rich and rewarding time for her. First, she and another older "overnight" film star, fellow Oscar winner Jessica Tandy, starred together in the modern portion of the beautifully nuanced, flashback period piece Fried Green Tomatoes (1991). She then outdid herself as the detached and depressed housekeeper accused of murdering her abusive husband (David Strathairn) in Dolores Claiborne (1995). Surprisingly, she was left out of the Oscar race for these two excellent performances. Not so, however, for her flashy political advisor Libby Holden in the movie Primary Colors (1998) and her quirky, liberal mom in About Schmidt (2002), receiving "Best Supporting Actress" nominations for both

Kathy has also done prolific work on TV as a seven-time Emmy nominee, and has taken to directing a couple of TV-movies on the sly. She was nominated for a DGA award after helming an episode of "Six Feet Under", in which she also had a recurring role. While some of her more recent movie parts have been generally unworthy of her talents, she has more than made up for it in TV-movies playing everything from cruel-minded caricatures (Little Orphan Annie's Miss Hannigan) to common, decent, every day folk.

Divorced from her husband since 1997, Kathy has been the Executive Committee Chair of the Actors Branch of the Academy of Motion Picture Arts and Sciences Board of Governors. 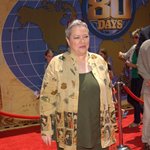 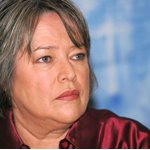 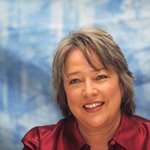 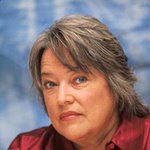 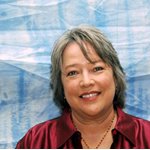 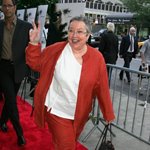 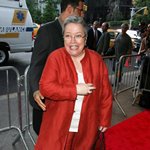