Strickland's career began with a brief appearance as a ghost in The Sixth Sense in 1999, a two-line part that she had received after impressing writer-director M. Night Shyamalan when reading lines for those auditioning for the film. Strickland said of Shyamalan, "He is a lovely man, and one of the most focused I've been around ... I still can't get over how tightly he ran his ship".[8] According to her, her role in the film helped her learn to temper her fake crying.[7] The same year, she served as an extra in the independent film The Sterling Chase. Strickland was cast in a slightly larger role opposite Winona Ryder and Angelina Jolie in James Mangold's drama Girl, Interrupted.

When staying in Philadelphia, Strickland was given opportunities to take part in other films in production in and around the city. Those included Rel Dowdell's Train Ride, a date rape thriller filmed in 1998, but not commercially released until 2005 because of financing problems.[9] She also appeared in the crime drama Diamond Men with Robert Forster and Donnie Wahlberg; it opened to sparkling reviews, with Richard Roeper of the Chicago Sun-Times declaring it "a fantastic film, with a good cast".[10] After she moved to New York City, Strickland was cast in Adam Bhala Lough's filmmaking debut Bomb the System, which received unenthusiastic notices from critics and was not shown outside film festivals until 2005.[11]

Strickland acquired stage experience in theatre productions such as A Requiem for Things Past in the summer of 1999,[12] and John Patrick Shanley's Women of Manhattan. She also acted in an episode of the television show Law & Order: Criminal Intent in December 2002 and made nine guest appearances on All My Children.[3] In 2003, Strickland was cast opposite Eddie Cibrian in the pilot episode for an uncommissioned small screen serial adaptation of John Grisham's novel The Street Lawyer.[13]

Strickland appeared in two romantic comedy films in 2003. Anything Else was written and directed by Woody Allen, and featured Strickland as the girlfriend of Jason Biggs (whom he snubs for Christina Ricci); the film was greeted with lukewarm reviews and dismal ticket sales.[14] (Strickland nevertheless referred to the film as her "big break" in a 2005 interview.[15]) The second, Something's Gotta Give (starring Jack Nicholson and Diane Keaton), was a major critical and commercial success,[16] though Strickland's part in the film was brief. She played the young love interest of Diane Keaton's character's ex-husband (played by Paul Michael Glaser), a relationship that raised the eyebrows of both Keaton and her daughter (Amanda Peet). The following year she made brief appearances in the direct-to-cable independent film Knots and the poorly received satirical comedy The Stepford Wives with Nicole Kidman,[17] playing a partygoer and a game show contestant, respectively. 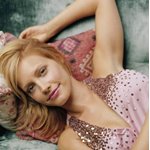 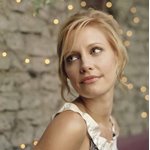 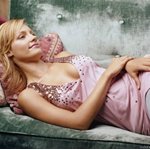 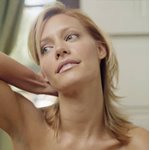 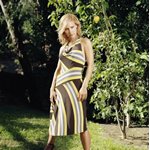 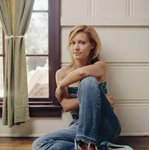 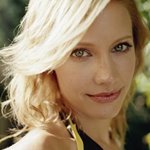 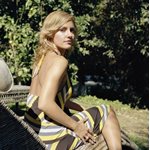