Henin is from the Walloon (French-speaking) region of Belgium. Her mental toughness and her one-handed backhand, a stroke which John McEnroe has called among the best backhands of any male or female player, are reasons she is one of the world's best players.[1][2] As of November 2006, she has won five Grand Slam singles titles, including three French Open singles titles, as well as a gold medal in singles at the 2004 Summer Olympics. 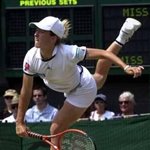 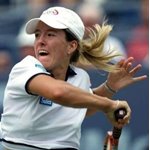