Justin Bruening was born 24 September 1979 in Chadron, Nebraska, USA. He joined the cast of "All My Children" in July 2003, playing the role of Jamie Martin.

Originally from a small town in Nebraska, with a population of 85 people, Bruening graduated high school with the other nine members of his class.

Following graduation, Bruening moved to San Diego where he was discovered by a modeling agent at a local McDonald's. Soon there after, came his first modeling job in Abercrombie & Fitch commercial.

Soon after his first commercial job, Bruening began to study acting and was noticed by the casting director at "All My Children," and the rest is history.

Justin Bruening is adjusting well to life in New York. When not on set, he enjoys playing the bounty of home video games. 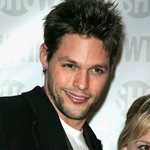