With her imposing mass of hair and amazon height, Julie Strain can be considered one of the greatest Siren of all time. Not only physically: even if she never did act in any classic movie, Julie is still considered one of the reigning queens of American B-movies. She posed for Playboy, then became the 1993 Penthouse Pet of the Year (at the age of 31!). Of course, all this lead the way to a decorative cinematic career, which includes becoming a pinup favorite, with such success that Bettie Page herself considers Julie as her legitimate heir. Nothing less, and what an endorsement!

Julie was born on February 18, 1962, in Concord, California, to a reconstructed family, where she could play around with nine other siblings! Very young, she began a fascination for horses when the family was living in Kansas. When playing cowboys and Indians, Julie dreamed of becoming a movie star and this hope would lead her to reach diverse goals in the future. Pictures of a teenage Julie shows much sparkle in her eyes and, of course, horrible hairdos.

In college, Julie became a sports fanatic, excelling in basketball and track athletics. And she could also jump, nearly qualifying herself for the 1980 Olympics. At 17, she fell in love with a 28 year old bodybuilder, which began another passion. With her imposing height, Julie wasn't displaying the supposed ideal feminine physique, but she became an excellent poser. This experience would became important for her future career. Soon, her picture would find itself on a San Francisco billboard for Calso drinks.

Julie married a certain Al Abono and became a professional housewife, passing the time in the breeding of Dobermans. This union would be short-lived. A near-fatal accident occurred, changing Julie's life forever. As she was enjoying a ride on her horse Scamp, a pony left without supervision attacked without reason. Julie fell on her head as Scamp tried to jump over a station-wagon, breaking one arm and badly scratching her back. When she came to her senses in the hospital, she didn't recognize any of her family members, nor any close friends. She couldn't even read, as she learned her alphabet once again in its entirety. All this would take two long years, as with becoming physically mobile once again. The mad pony's owner was successfully sued and paid a big price. With the money, Julie traveled for nearly a year, as this unfortunate misadventure made her a more daring individual.

She went to Vegas for a boxing match between Sugar Ray Leonard and Roberto Duran, meeting along the way John Rockwell, presenting himself as an agent wishing to make her a star. Like in the movies! Taking her seat near the ring, Julie received a standing ovation as everyone thought she was topless because of the color of her suede outfit. A remarkable introduction to the world of celebrities.

In 1989, at the age of 28, Julie took a chance with Playboy. She was a guest in an "article" about women over six feet in height. The big cheeses were hesitant about making her an official Playmate. But their competition, Penthouse, welcomed Julie with open arms and she then found eternal fame. Let's be frank and admit that Julie's look was more suitable for Bob Guccione's publication. So, she posed for a pictorial involving a horse on the beach and she couldn't very much ask for more, could she? Like I mentioned, she became the 1993 Pet of the Year, at 31, with the privilege of having her own videotape in a centerfold series. Many exciting photo shoots would results in the years to come, needless to say.

Julie made her film debut in 1990 for Repossessed with Leslie Nielsen, Linda Blair and the ex-Governor of the state of Minnesota, Jesse Ventura. Of course, this production was a spoof of the original Exorcist movie. And this job gave her 100 bucks! Julie also became a body double for famous actress (as for Geena Davis for Thelma and Louise) and soon enjoyed short but memorable cameos in many low-budget films. Bigger parts came her way via Andy Sidaris' amusing action movies, joining other sexy ladies in skimpy bikinis wielding menacing machine guns. Julie's picture was more often than not in the main packaging of the video boxes, not a bad move for increasing the rental revenues.

Artist Olivia de Berardinis chose Julie as a model, resulting in many surrealistic paintings that drove the fans wild. At a Golden Apple Comic Book Store in Hollywood, Julie met a young fan waiting in line for her autograph: Kevin Eastman, co-creator of the Teenage Mutant Ninja Turtles. A romance followed and they're still married to this day. They collaborated on the animated film Heavy Metal 2000, more or less a follow-up to the 1981 Heavy Metal. Since 1998, Julie can be seen on Sex Court on the Playboy Channel, as the main judge, in this parody of the many court shows on mainstream television.

Still today, Julie remains hard at work. She was part of a Blair Witch Project parody, The Bare Wench Project (and its two sequels!). She directed herself in two movies, Vampire Child and Lingerie Kickboxer, as we can see her affection for B-movies just by reading these titles. Recently, she was very candid about her face surgery and even produced photographs of the "aftermath"! Her good humor and beauty are not even close to ever be extinguished. And, I ask you, who could be more photogenic?
Features
Home 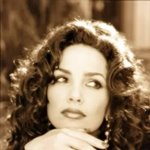 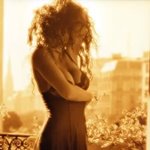 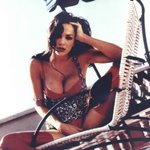 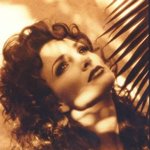 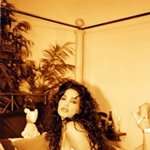 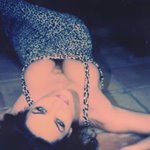 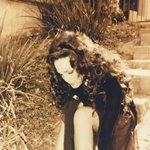 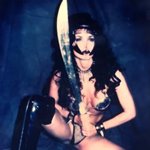