Gavin MacLeod was raised in Pleasantville, New York, the son of a Chippewa Indian and gas station owner. He followed his 1952 graduation from Ithaca College with military service, then moved to New York City and worked for a while as an usher and elevator operator at Radio City Music Hall. A solid break on Broadway in "A Hatful of Rain" in 1956, led him to move to Los Angeles to attempt film and TV. For awhile he earned a minor reputation as a second-string heavy in crime stories.

His career more or less flowed and ebbed with these minor dramatic roles until 1972, when his typecast as a shady, dangerous character was shattered forever. As Murray Slaughter, the balding, beaming newswriter on "Mary Tyler Moore" (1970) wisecracking, humble and un-hip to a fault, Gavin (and Murray) became friendly household names in the 70s. From then on, he could only be envisaged as a loveable schmuck and nice guy.

This image was later cast in stone with the enduring success of another TV series, "The Love Boat" (1977), in his role as the ingratiating Captain Stubing. On the down side, "Love Boat" marred his chances to be considered for more challenging work, and his inability to cope with success led to alcoholism and divorce from second wife Patti. However, he later turned his life around, remarried his wife, and wrote a biography called "Back on Course." Today he appears occasionally on the summer stock/dinner theater stage and as a guest performer on TV. 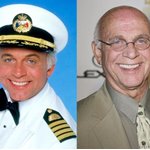