Having been KO'd by both critics and audiences as an actor, Frank Stallone, a "Rocky"-like survivor of his own, has rolled with the punches over the years. As a singer, composer, guitarist and musician, however, he has received more encouraging and courteous reviews. His interest in music stems from childhood.

Born July 30, 1950, in New York City, and an amateur boxer in his salad days, Frank's big break coincided with that of his lookalike older brother, writer/actor Sylvester Stallone, who became a superstar with the Cinderfella-like success of his legendary boxing film Rocky (1976). Frank appeared briefly and wrote and performed the song "Take You Back" a capella on a street corner. Frank continued to benefit from brother Sly's monumental success with additional singing appearances in Paradise Alley (1978) and Rocky II (1979). This culminated with the Sly-directed film Staying Alive (1983), the sequel to Saturday Night Fever (1977) starring John Travolta as (again) Tony Manero. Frank wrote (along with The Bee Gees) many of the songs from its soundtrack and was nominated for both Grammy and Golden Globe awards for one of them, entitled "Life Goes On."

Frank decided to branch out and boldly moved into the acting ring in the mid-'80s, primarily in crime and action-oriented vehicles. Most of his representative films such as The Pink Chiquitas (1987), _Outlaw Force (1987)_ and Lethal Games (1990) were harshly reviewed and quickly dismissed. Some of his better performances actually came in supporting roles, such as the brute-like bartender in Barfly (1987), which paired Mickey Rourke with Faye Dunaway as big-time boozers, and his role as Alvin Carpis in the gangster movie Public Enemies (1996).

Spending a lifetime avoiding his brother's shadow, Frank refocused on his music, and is now traveling and touring with the sound of "big band" jazz. A noted boxing historian and collector, Frank more recently served as a boxing authority and consultant for his brother's short-lived TV reality show "The Contender" (2005), appeared in a bit part in Rocky Balboa (2006) and has a co-starring role in the upcoming action film Taken by Force (2008). 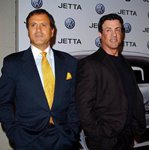 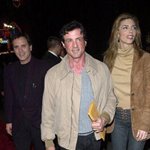