A native of North Canton, Ohio, Eddie McClintock, who once worked briefly as an insurance broker, began his career in entertainment industry by working behind the camera as a production assistant for three years. Following the suggestion of actors with whom he had worked, he decided to perfect his talents in front of the camera, and soon enrolled in drama classes. With his training and genial man’s man appeal, McClintock finally landed work on commercials, most remarkably in a series of prestigious Coors Light beer spots. A gig on the popular daytime series “The Young and the Restless” followed before he made his primetime TV show acting debut in early 1997 with a guest spot in the CBS “Diagnosis Murder” and a recurring role on the Fox sitcom “Ned and Stacey,” as Chazz Gordon. He soon worked his way up the television ladder to series regular on the short-lived Fox sitcom “Holding the Baby in 1998, playing Jimmy, the malicious brother of an unexpectedly single father.

The following year saw the actor appear in episodes of “Felicity,” as the homosexual older brother of resident advisor Noel, and “Zoe, Duncan, Jack and Jane” (both The WB), as a charming but bungling waiter who wins the help and, unwittingly, the heart of wacky teen Zoe. While these attempts made McClintock a popular face to a larger viewer, his true breakthrough arrived when he was cast as Jake Donovan, the innovative writing assistant to a triumphant but eccentric horror novelist (Tony Shalhoub) on the NBC sitcom “Stark Raving Mad,” a role he played from 1999 to 2000. During this time of period, he also could be seen in two films, 1999’s comedy Mumford, helmed by Lawrence Kasdan, and the 2000 Hollywood Film Festival-screened Screenland Drive.

After guest performances in “Sex and the City,” “Just Shoot Me!” and “Spin City” (all 2000), McClintock made his TV-movie bow in 2001’s Say Uncle, a great pilot about a gay man who wants to hoist his dead sister’s children directed by David Lee. This was followed by a supporting role opposite Christy Carlson Romano and Jordan Wood in the comedy made-for-TV film B.S., the next year. Also in 2002, he landed a lead role in the independent romantic comedy Moving August, where he portrayed a young photographer departing his apartment who falls for the woman moving in, appeared with Cameron Diaz, Christina Applegate and Selma Blair in the comedy feature The Sweetest Thing and was featured as David in the Steven Soderbergh ostentatious return to indie cinematography, Full Frontal, which starred David Duchovny and Catherine Keener.

McClintock then appeared in an episode of the brief sitcom “The Pitts” (2003), starred as Kurt Batner, one of many suitors competing for the affections of an prevailing book editor (Charisma Carpenter), in the ABC comedy/romance film See Jane Date (2003) and had a regular role as the prudent, but lighthearted roommate of a young attorney (Scott Foley) in the NBC drama show “A.U.S.A.” (2003). He had a more sizeable part in Picking Up and Dropping Off (2003), a romantic comedy telefilm about two single parents (Amanda Detmer and Scott Wolf) finding comfort in one another after being separated from their partners. Next up were guest roles in such shows as “Less Than Perfect” (2003) and “Married to the Kellys” (2003-2004).

Following appearances in “House M.D.” and “Monk” (both 2005), McClintock undertook meatier roles in television films Confessions of an American Bride (2005), as the old flame of a hesitant bride-to-be (Shannon Elizabeth), and Three Wise Guys (2005), as a sarcastic ladies’ man. He returned to regular series work in early 2006 with a costarring role as Jody Crumb, the alienated skirt-chasing brother of an unsuccessful Hollywood writer in the ABC comedy “Crumbs,” opposite Jane Curtin and Fred Savage. Unfortunately, the show was cancelled after only five episodes. After “Crumbs” departed the airwaves, he could be seen making guest appearances in “Desperate Housewives,” “My Boys,” and more recently in the comedy series “Big Day.”

The 40-year-old actor is scheduled to appear in a forth episode of the comedy series “The Winner” in 2007. The show stars Rob Corddry as Glen Abbott, Lenny Clarke as Ron Abbott, Keir Gilchrist as Josh McKellar and Erinn Hayes as Alison Mckellar. 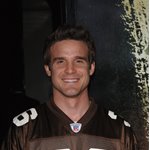