While wandering the street of Paris, a West African born, Djimon Hounsou caught the attention of clothing designer Thierry Mugler, who introduced him to the modeling world. Once set up in his new line of work, he headed to Los Angeles to give acting a try and soon found himself working with director David Fincher for several music videos, including those of Paula Abdul, Madonna and Steve Winwood. Hounsou’s first job arrived with the 1990 film Without You, I’m Nothing, where he was cast as Sandra Bernhard’s ex-boyfriend. Billed as Djimon, he then appeared in an episode of “Beverly Hills, 90210” (1990) and had small parts in the Kurt Russell vehicle Unlawful Entry (1992) and the smash hit Stargate (1994), also with Russell.

In 1997, Hounsou’s career gained momentum when renowned filmmaker Steven Spielberg had him play the supporting role of Cinque, the leader of a slave ship rebellion, in the drama/history film Amistad, opposite Morgan Freeman, Nigel Hawthorne and Anthony Hopkins. Delivering an impressive performance, the black actor won an Image for Outstanding Lead Actor in a Motion Picture, as well as earned a Golden Globe and a Golden Satellite nominations. The same year, he also starred as Fyah in the independent film Ill Gotten Gains and had a supporting part in writer/director Derek Dunsay’s The Small Hours.

After Amistad, Hounsou found increasingly stable employment on both the wide and small screens. He portrayed Vivo in the action/horror film Deep Rising (1998) and was cast in the recurring role of Mobalage Ikabo, a political banish, in the popular medical series “ER” (1999). In 2001, he continued to increase his profile by nabbing a Blockbuster Entertainment nod for Favorite Supporting Actor, for his work in the Oscar-winning Gladiator (2000).

Next, Hounsou teamed up with Kate Hudson and Heath Ledger in the remake of Four Feathers (2002) and acted in the short film Heroes (2002). However, it was his scene stealing role in writer-director Jim Sheridan’s mesmerizing autobiographical movie In America (2002) that made the actor a favorite among critics. As Mateo, the tormented and virus afflicted artist, Hounsou took home an Independent Spirit, a San Diego Film Critics Society, a Black Reel and a Golden Satellite for Best Supporting Actor. Moreover, his alternately scorching and touching performance gave him a Best Supporting Actor Academy Award nomination.

The 6’ 4” tall performer could be seen in the 2003 action features Biker Boyz, along with Laurence Fishburne, Derek Luke and Orlando Jones, and Lara Croft Tomb Raider: The Cradle of Life, starring Angelina Jolie, and in the western film Blueberry (2004), opposite Vincent Cassel. From 2003-2004, he also played Kazari Bomani in the television series “Alias.” His raising profile was further confirmed in 2005 when Hounsou was hired to appear in three movies. He first had a brief, but memorable turn, as the mysterious voodoo practioner/L.A. club owner Papa Midnight in the supernatural thriller Constantine, opposite Keanu Reeves, and then portrayed a sexy piano-playing electrician who lives above Queen Latifah’s hair salon in Beauty Shop (2005), a spin-off of the hit Barbershop franchise. He also was cast opposite Ewan McGregor and Scarlett Johansson in the Michael Bay-helmed thriller The Island (2005).

In 2006, the 42-year-old performer costarred with Leonardo DiCaprio in the adventure/thriller Blood Diamond, for director Edward Zwick (The Last Samurai), and played Ajihad in the fantasy film Eragon, which starred Edward Speleers in the title character. Hounsou is also scheduled to star as a talented pianist in the forthcoming drama The Trunk (2007). Filming is set to begin in December 2006. 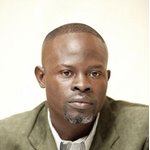 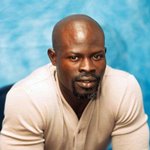 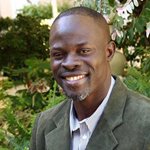 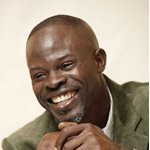 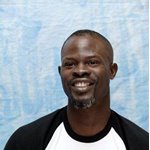 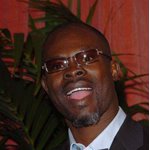 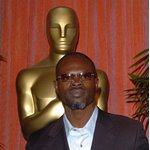 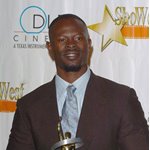