Corey Feldman started work in the film industry at the tender age of three, the start of one of the most turbulent careers ever in American cinema. He is most remembered for his part as one of the Frog brothers in the horror movie The Lost Boys (1987). However, the characters he has played in most of his movies have always been slightly way out. His major part alongside Meredith Salenger in Dream a Little Dream (1989) was the first time he had played a part like Bobby Keller, which he handled very well. Feldman has also teamed up with his friend and co-star in Dream a Little Dream (1989), Corey Haim, in several films.

In the early 1990s, sadly, he was arrested for possession of drugs, but has now bounced back and is again doing movies, and is better than ever. With his performances in Meatballs 4 (1992) and Edge of Honor (1991) with Meredith Salenger, things are now looking up for Feldman. 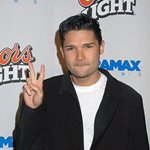