Celia Cruz made some recordings for radio stations, which were not published commercially, before joining Venezuela’s Turpial label. With Turpial, she released an album with the Leonard Melody and Alfonso Larrain orchestras, in 1948. Her fascinating voice took her to the popular Cuban band La Sonora Matancera, which was searching for a replacement for their vocalist in 1950.

At first, listeners could not accept the transition, but Cruz demonstrated her talent with the single “Mata Siguaraya,” which won over the public’s heart. Her rising fame brought her to the screen, where she appeared in Rincon criollo (1950), Affair in Havana (1957) and the musical comedy Amorcito corazón (1961). Cruz remained with the musical group for 15 years and went to Latin America countries with La Sonora. After Fidel Castro ruled the country, in 1960, she and her future husband fled to the United States.

In 1961, Cruz and Knight performed at the Hollywood Palladium in New York, but left the Palladium’s orchestra a year later to pursue a solo career. With Pedro Knight as the manager, Cruz teamed up with Cuban jazz legend Tito Puente and released eight albums, none of which received satisfying success. Meanwhile, the performer also took a role in the horror movie La Venganza de la momia (1973) and the drama Juegos de sociedad (1974).

After signing to Vaya Records, Cruz worked on an album with Johnny Pacheco, trombone player and the co-owner of the Fania label (the owner of Vaya Records). Released in 1974, the album Celia y Johnny went gold and led to her involvement with the Fania All Stars, with which she toured Europe, Africa and Latin America.

She also contributed to an Eastern Air Lines commercial in Puerto Rico in the late 70s, singing the catchy phrase “Esto sí es volar.” Cruz, who was seen as Amparito in the soap opera “Roque Santeiro” (1985), made a special appearance at the Grammy Award ceremony in 1987 with Tito Puente. She then took a part in the 1988 Hollywood staging of “Salsa,” alongside Draco Cornelio Rosa.

Earning critical praise, Cruz won a Latin Grammy and a Grammy for Best Tropical Latin Performance after performing a duet with artist Ray Barretto in “Ritmo En El Corazon” (1989). On screen, her popular performance as Evalina Montoya in the musical drama The Mambo Kings (1992, starring Antonio Banderas and Armand Assante) brought her to other roles in such film as “Valentina” (1993), the romantic comedy The Perez Family (1995, took the supporting role of Luz Pat) and the soap opera “El Alma no tiene color” (1997, played Macaria).

In 1998, Cruz released the album Duets, which featured her collaboration with Willie Colon, Angela Carrasco, Oscar D’Leon, Jose Alberto “El Canario,” and la India. She also launched other albums, including La Negra Tiene Tumbao (2002), which earned her a Grammy and Latin Grammy award for Best Salsa Album. During this time, she began suffering from a brain tumor.

The second Grammy for Best Salsa Album came with Cruz’s final album, Regalo de Alma (2003), which she recorded while recuperating from brain surgery. In appreciation of her work in show business, Cruz was given a Lifetime Achievement Award from the Imagen Foundation in 2003. During her 50-year career, Celia Cruz recorded over 70 albums. 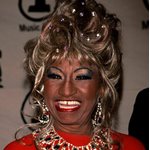 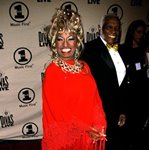