Brittany Curran was born in Weymouth, Massachusetts on June 2nd 1990. After living in Avon for her first three years her family moved to Mockingbird Lane in Marston's Mills, Cape Cod. Brittany spent several of her elementary school years living on Cape Cod and attended Marston's Mills East Elementary School. Her performing years began as a little girl studying ballet, jazz, and tap at the Sandwich Community School: in addition to summer theatre she also performed as a mouse & reindeer for several seasons in The Nutcracker Suite!

Before 3rd grade Brittany and her family moved to Hingham, Massachusetts. Attending William L. Foster Elementary School Brittany continued her dance, added Violin, and performed in the Foster Follies. This was the time Brittany began to memorize dialogs and scenes from movies; she would walk around her back yard reciting dialogs and acting out every scene of The Parent Trap. During a family vacation to Disney World, Brittany handed Cinderella a letter she wrote asking to be a lead in a Disney movie, or an extra if she had to. The letter included every Disney resort she would be staying at, dates, and phone numbers!

A few years later Brittany was attending a concert with her dad. After the concert Brittany saw an advertisement for acting classes. She quickly cajoled her dad into letting her attend, which led to her participating in a recital - then, "discovered" - long story short she was off to Hollywood and under contract with a premier kids talent agency!

Shortly after moving to Hollywood at the age of eleven Brittany booked roles on Mad TV and Power Rangers. She shot her first commercial for Chevrolet opposite a childhood hero, Olympian skater Michelle Kwan. She went on to shoot principle roles in about twenty commercials(KFC, Campbell's Soup, Post Cereal, Sears, T-Mobile, AT&T, Hewlett Packet, etc.).

With a combination of talent, school, acting teachers, manager & agents, and family, Brittany has blossomed into one of Hollywood's premiere young actors! At the beginning of 2007 Kidzworld.com - a leading child and teen magazine - selected Brittany as one of the "Top-Five-Faces-To-Watch-2007-The Kidzworld Girls." Brittany has shown them to be right by adding on to her resume with a myriad of leading roles in film and television.
Her letter to Cinderella?! In 2005 her dream came true, Brittany booked a lead in the Disney movie Go Figure. 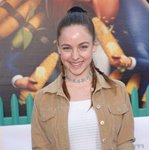