Sörenstam was invited to play in three 1993 LPGA tournaments where she finished T38th, 4th, and T9th earning more than $47,000. She finished second four times on the Ladies European Tour and was 1993 Ladies European Tour Rookie of the Year.[25] By tying for 28th at the LPGA Final Qualifying Tournament she earned non-exempt status for the 1994 season.[5]

Sörenstam's first professional win came at the 1994 Holden Australian Open Championship on the ALPG Tour.[26] In the United States Sörenstam was LPGA Rookie of the Year, had three top-10 finishes, including a tie for second at the Women's British Open and made her Solheim Cup debut.[25][27]

1995 was her breakout year when she won her first LPGA Tour title at the U.S. Women's Open.[5] She finished top of the Money List and was the first non-American winner of the Vare Trophy.[28][29] She became only the second player to be Player of the Year and Vare Trophy winner the year after being Rookie of the Year.[30] A win at the 1995 Australian Ladies Masters and two other wins on the Ladies European Tour put her top of the LET Order of Merit and made her the first player to top both the European and LPGA Tour money lists in the same season.[31][25][32] Her success worldwide meant she won the Jerringpriset award in Sweden, the country’s most prestigious award in sports as well as being awarded the Svenska Dagbladet Gold Medal.[33][34]

The following season saw Sörenstam win her home LET tournament, the Trygg Hansa Ladies' Open in Sweden and three LPGA tournaments including the U.S. Women's Open.[35] In defending her title she became the first non-American to win back to back U.S. Women's Open titles,[5] passed the $1 million mark in LPGA career earnings and won her second consecutive Vare Trophy.

Away from the golf course Sörenstam married David Esch on January 4, 1997. They met in 1994 in Phoenix, Arizona where he worked for Ping and got engaged at the 1995 Evian Masters.[36][37] On the course she won 6 1997 LPGA titles regaining the Money List and Player of the Year titles. Internationally she won once on the JLPGA and defended her home LET title at the renamed Compaq Open. She became the first player in LPGA history to finish a season with a sub-70 scoring average of 69.99 en route to retaining the 1998 Player of the Year and Money List titles as well as winning the LET Swedish tour stop for the third time running.[29]

At this point in her career, Sörenstam says she lost focus having reached her biggest goals.[10] Karrie Webb became the best LPGA Tour player but Sörenstam still managed to win more LPGA tournaments than any other Tour player during the 1990’s.[30] She qualified for the World Golf Hall of Fame when she won the 2000 Welch's/Circle K Championship, but was not eligible for induction until finishing her tenth year on the LPGA tour in October 2003.[38][39] Sörenstam was the first international player to be inducted into the Hall of Fame through the LPGA criteria.[40][39][41]

Having lost her pre-eminent position, Sörenstam embarked on a new five-day-a-week exercise program including weight-lifting and balance work which by 2003 had added over 20 yards to her driving distance.[42][43] This worked wonders as during the 2001 season she had eight LPGA wins, became the only female golfer to shoot a 59 in competition and the first LPGA player to cross the $2 million mark in single-season earnings.[44][28] She set/tied a total of 30 LPGA records en route to regaining the Vare Trophy and winning her fourth Player of the Year and Money List titles. In a made-for-TV alternate shot competition between the two best male and female players in the world, Sörenstam and Tiger Woods beat Karrie Webb and David Duval on a night that at the time provided women's golf its largest audience ever.[45]


Annika at the Women's British Open 2004At the end of that season Karrie Webb said she "would eat her hat" if Sörenstam repeated her eight wins in 2002.[46] By the end of 2002 she had to eat her words as Sörenstam joined Mickey Wright as the only players to win 11 LPGA tournaments in one season, earning her fifth Player of the Year title and fifth Vare Trophy. She successfully defended the Kraft Nabisco Championship, her fourth major victory and there were also victories in the ANZ Ladies Masters in Australia and Compaq Open in Sweden on the Ladies European Tour giving her 13 wins in 25 starts worldwide.[47][48][49]

Amid notable controversy, Sörenstam was invited to play in The Colonial golf tournament in Fort Worth, Texas in May of 2003, making her the first woman to play in a PGA event since Babe Zaharias, who qualified for the 1945 Los Angeles Open.[50] PGA player Vijay Singh was particularly critical of her presence being quoted as saying she had no business playing and he hoped she missed the cut, although he subsequently apologised.[51][52] Cheered through each hole, she shot five over par, tying for 96th out of the 111 who finished the first two rounds, missing the cut.[53] After shooting 1-over-par 71 in the first round, Sorenstam said she was nervous all day but pleased at her performance.[54]

Later in the season she won the LPGA Championship and the Women's British Open becoming only the sixth player to complete the LPGA Career Grand Slam.[55][56] She had five other victories worldwide, set/tied a total of 22 LPGA records and earned her sixth Player of the Year award. She competed against Fred Couples, Phil Mickelson and Mark O'Meara in the 2003 Skins Game, finishing second with five skins worth $225,000; Sörenstam holed a 39-yard bunker shot on the ninth hole for only the eighth eagle in The Skins Game history.[57] She was awarded her second Jerringpriset award in Sweden plus the 2003 Golf Writers’ Trophy by the Association of Golf Writers.[58][59]

Sörenstam's dominance continued in 2004 with her seventh LPGA Player of the Year award tying Kathy Whitworth for the most in LPGA history. She posted 16 top-10 finishes in 18 LPGA starts, including eight wins, had two additional international wins, became the first player to reach $15 million in LPGA career earnings, took her own LPGA single-season scoring average record to 68.69696 but played too few rounds to win the Vare Trophy.[60] The United States Sports Academy named her 2004 Female Athlete of the Year, the Women’s Sports Foundation gave her the 2004 Sportswoman of the Year Award and the Laureus World Sports Academy named her World Sportswoman of the Year.[61][62][40] She also released a combination autobiography and golf instructional book, Golf Annika's Way.[63]

2005 was a landmark year in Sörenstam's life both on and off the golf course. The announcement in February that she had filed for divorce from David Esch, her husband of eight years, which was finalised in August did not adversely affect her golf.[36][64] Her achievements included being the first player in LPGA history to win a major three consecutive years at the LPGA Championship and the first golfer in LPGA or PGA history to win the same event five consecutive years at the Mizuno Classic.[65][66] 11 wins in 21 tournaments entered worldwide included victory in the Scandinavian TPC hosted by Annika where she presented herself the trophy and gave her an eighth Moneylist title (tying the LPGA record), an eighth Rolex Player of the Year (POY) award (a record) and a sixth Vare Trophy.[67][68][29] She is the only LPGA player ever to win Moneylist, POY award and Vare trophy in the same year in 5 different years. Team competition saw her make her seventh consecutive Solheim Cup appearance, her 4 points making her total 21, the event's all-time leading points earner, and the inaugural Lexus Cup was played with Sörenstam as the Captain of the victoriuos International Team.[69][70][25][71]

When the first-ever official Women's World Golf Rankings were unveiled in February 2006, Sörenstam was confirmed as the number-one player in women's golf, a position she relinquished to Lorena Ochoa on 22 April 2007.[2][83] In partnership with Liselotte Neumann in team Sweden she won the Women's World Cup of Golf, opened her LPGA season with a defence of her title in the MasterCard Classic, then went winless in eight starts, causing some to talk of a slump.[84][85] The win drought ended at the U.S. Women's Open won in an 18-hole playoff for her 10th major championship title, tying her for third in most major championship wins of all time.[86][1] Fittingly, the win came just weeks after being sworn in as a U.S. citizen, Sörenstam becoming a dual national.[87] She totalled 3 wins on the LPGA and two on the Ladies European Tour, the inaugural Dubai Ladies Masters and the Swedish tournament she hosts, which she defended in her home town at the course where she learnt to play.[88][89] Her International team lost the second Lexus Cup competition to Team Asia.[90]

Sörenstam started 2007 by losing a playoff in the defence of her MasterCard Classic title.[91] At the Kraft Nabisco Championship she shot her highest 72-hole score in a major in nine years, a result explained by her subsequent diagnosis with ruptured and bulging discs in her neck, the first major injury in Sorenstam's 13-year career.[92][93][94] 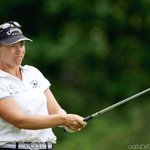 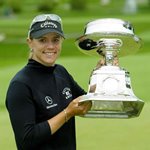 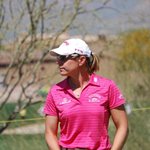 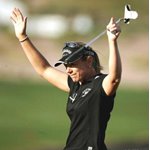 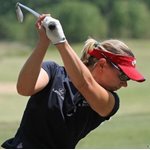 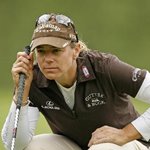 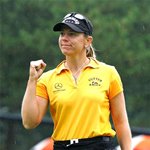 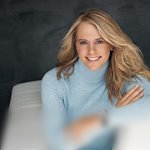