Bargnani entered the 2006 NBA Draft and was selected first overall by the Toronto Raptors. In his NBA summer league debut against the Washington Wizards, Bargnani recorded 20 points, 4 rebounds, 2 blocks and 1 steal in 29 minutes of action. He became the first player to foul out in a summer league game as he collected 10 fouls in a game against the Sacramento Kings played on July 9, 2006 during the Vegas Summer League. On November 1, 2006, in his regular season debut against the New Jersey Nets, in 8 minutes of play he recorded 2 points, 2 rebounds and 2 blocks.[2] In the process, he also became the fourth ever Italian-born player to play in the NBA.[3]

Like many rookies, Bargnani took some time to adapt to the league and as he slowly improved his game, his confidence and playing time increased. Nonetheless, it did not take long for home fans to warm up to Bargnani. On January 7, 2007, 10,000 Andrea Bargnani figurines were given away at Air Canada Centre for the game against the Washington Wizards.[4] As the midseason approached, Bargnani was selected as NBA's Eastern Conference Rookie of the Month (January 2007),[5] joining fellow teammate Jorge Garbajosa (winner of the award in December 2006) as the sixth Raptors player to win the monthly honor.[5] Together with Garbajosa, Bargnani was also selected to play in the T-Mobile Rookie Challenge game.[6] After the All-Star break, Bargnani continued to work on his defense and shooting (averaging 14.3 ppg and 3.9 rpg in 12 games for the month of February 2007), and he was selected as the Eastern Conference Rookie of the Month for the second straight time on 1 March, 2007.[7] Bargnani became the third Raptor ever to win the award twice, joining Vince Carter and Damon Stoudamire.[7]

On 21 March 2007, Bargnani underwent emergency appendectomy surgery after being taken to hospital following illness experienced after practice the night before.[8] He recovered after about a month, and ended the season, averaging 11.6 points and 3.9 rebounds per game.[9] His performances were credited as helping the Raptors win their first ever Division title, as well as their first NBA Playoffs berth in five years; Bargnani came in second for Rookie of the Year.[10] In the 2007 NBA Playoffs, Bargnani averaged 11.0 ppg and 4.0 rpg as the Raptors were defeated by the New Jersey Nets 2-4 in the first round.[9] On 8 May 2007, Bargnani and Garbajosa were named to the NBA All-Rookie team.[11] 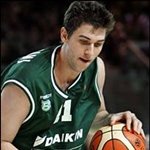 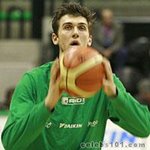 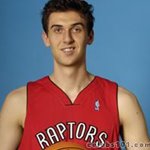 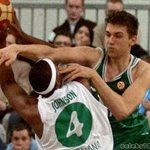 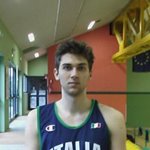 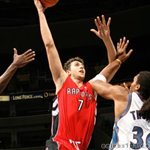 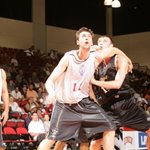 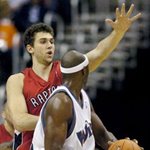