Alvaro Bautista Arce was born on the 21st November 1984 in Talavera de la Reina. When he was three years old, his father who is a mechanic built him a little bike to ride around. Five years later he competed in his first minimoto race and despite being much younger and smaller than most of his competitors he finished runner up in the Madrid Minimoto Championship in his second season. He then went on winning the Championship three years in a row and simultaneously raced in the 50cc Aprilia Cup in 1997 where he claimed his first podium, finishing the season in 6th place.

Another year in the 50cc Aprilia Cup saw him taking two more podiums and ending the season in third place when Alberto Puig chose him from over 4000 applicants for the famous Movistar Activa Joven Cup in 1999. He finished his first year in a respectable 5th place, in front of Dani Pedrosa, earning him a second year in the Cup and a spot as a back-up rider for the 125cc Spanish Championship. But a severe injury in 2000 set him back and despite taking one podium in the Movistar Cup, he only finished the season in ninth place. More misfortune was to come for Alvaro in 2001 when he entered the 125cc Spanish Championship with Team Belart which had to fold halfaway through the season due to financial reasons. But he was spotted by Manuel Morente who signed him up for the remaining races of the season and offered him a new team for the following year.

In 2002 Alvaro had his first proper season in the 125cc Spanish Championship, riding under the colours of the Atlético de Madrid team, and fighting for the title with Héctor Barbera until the final round at Valencia where he set pole position but finished fifth after crashing in the race, securing him the runner-up spot in the championship. That season also saw him race against international competition for the first time. In the 125cc European Championship he scored a podium in Assen and a fourth place in Hungary while he also competed in four 125cc World Championship races as a wildcard with Team Atlético de Madrid.

Alvaro’s connection with football was deepened in 2003 when Dutch footballer Clarence Seedorf signed him up for the newly found Seedorf Racing Team, to compete his first full season in the 125cc World Championship. He finished his debut year in 20th place overall with 31 points, his best finishes being a fourth place at Phillip Island and a sixth place at Valencia. The same year he was also crowned Spanish Champion with two races to go and after an extremely dominant season, never being off the podium and with five consecutive pole-to-victory finishes.

In 2004 he continued with Seedorf Racing in the 125cc World Championship, taking a creditable seventh place overall after finishing on the podium four times, with a second place at Donington Park and thirds at Qatar, Malaysia and Valencia. With the main contenders leaving the class he started the 2005 season as one of the 125cc title favourites, but with a switch from Aprilia to Honda it proved to be a year to forget – a different team structure, crashes and mechanical failures made Alvaro struggle through the season and despite several great showings of his talent he ended the year in a lowly 15th place.

After difficulties to get out of his contract with Seedorf Racing before the 2006 season, Alvaro joined the ranks of Jorge Martinez’ MVA Aspar Team extremely late. Already having a complete team with four riders set up, Aspar went to great length to get another bike, mechanics and sponsors for Alvaro who he tried to sign up since his national championship win in 2003. But Alvaro more than made up for that effort by showing a strong preseason form and subsequently winning his first 125cc race at the first championship stop in Jerez, leading the race from start to finish. Another dominating win followed in Qatar, making Alvaro the first 125cc rider in four years to win back-to-back races. His domination continued all throughout the year, always leading the championship table with a great margin and finally becoming 125cc World Champion in Australia, three races before the end of the season. He raked up eight victories and only was off the podium twice during the whole year – each time ending up fourth after an engine failure. With eight pole positions, seven fastest laps and 338 points Alvaro broke numerous records during an almost perfect season that will be very hard to match by future riders.

Staying with the Aspar Team he moved up to 250cc in 2007, adapting very fast to the new class. He claimed his first 250cc podium in the season’s second race in Jerez and continued to be a regular podium visitor throughout the season. With wins in Mugello and Estoril he finished his first 250cc season in fourth position overall and won the FIM “Rookie of the Year” Award.

After the three main contenders left the class Alvaro was once again set as the main title favourite for 2008, but bad luck and mechanical problems in the first half of the season hampered his chances considerably. Despite being the fastest rider in qualifyings and races, he was only eigth in the standings after the first six races of the season, 65 points behind the leader. But with ten consecutive podiums and a total of four wins, Alvaro moved up the ranks to finish the season in second place.

Nowadays Alvaro still lives in his hometown of Talavera de la Reina with his parents. He is a very funny and happy guy, but shy as well. During the races he is very focused, but always good for a smile as soon as it’s over. Alvaro’s hobbies inlude skiing and mountain biking, as well as Supermoto – always with his friend and manager Armando Guerrero. Outside the world of racing he likes to travel and go out with his best friends Carlos and Alex. 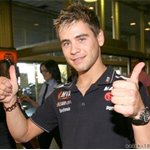