Known simply as "Zo", Mourning plays at center and is 6 ft 10 in (2.08 m) tall, and weighs 261 lb (118 kg/18.6 st). His tenacity on defense twice earned him NBA Defensive Player of the Year Award and perennially placed him on the NBA All-Defensive Team. He is applauded for making a comeback after undergoing a kidney transplant and years later winning his first NBA Championship with the Heat. He has also played for the Charlotte Hornets and New Jersey Nets. 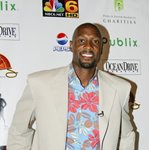