Hleb became Arsenal's first signed of the summer of 2005 when he moved to Highbury from Vfb Stuttgart for a total fee of £9.94million.

The Belarus international had carved out a reputation as an exciting and skillful midfielder in the Bundesliga.

For Stuttgart, the Belarusian lined up either centrally behind the strikers or floating wide on the left. Yet wherever he lines up, he can be a devastating attacking force, especially when using his quick feet, pace and perfect balance to effortlessly glide past defenders.

Hleb began his career in Belarus with FC BATE Borisov, making 40 appearances and scoring 10 goals and winning the League title in 1999.

The former Under-21 international attracted the attention of Stuttgart, who signed the midfielder in July 2000.

He made his debut for country in a World Cup qualifying defeat in Wales in 2001.

Hleb then scored on his first international start in April 2002 in a 5-2 win over Hungary. That same year he was named Belarus Sportsman of the Year.

The player helped transform Stuttgart from a mid-table outfit to one which challenged at the top of the table. They finished second in the table in 2002/03, thus qualifying for the Champions League in 2003/04.

He played in all eight Champions League matches, including two against Manchester United.

The 2004/05 season was very much a mixed one for Hleb. No-one in the Bundesliga created more goals than him, with 14 assists to his credit. Yet over the campaign as a whole his form was patchy and just two league goals was a poor return for a player of his class.

His performances for his country that term catapulted them to the brink of qualification for the play-offs for the 2006 World Cup in a group headed by Italy.

Hleb made 137 appearances in his five years with Stuttgart.

Arsenal manager Arsene Wenger said: 'He is a player I have admired for some time now and I know he will provide our squad with great quality. Hleb has proved his ability with his performances in the Bundesliga in recent seasons and he definitely has the potential to do very well with Arsenal.'

Hleb made his Gunners debut in a 2-1 Community Shield defeat to Chelsea at the Millennium Stadium, replacing Matthieu Flamini at the break.

He was beginning to win plaudits for his performances before he was ruled out through injury for two months in October.

On his return he often flattered to deceive. Despite being full of skill and having excellent ball control there remained a question mark over his end product.

But for an injury-hit debut season there was enough for Wenger to be enthusiastic about and he started the 2006/07 season well.

In good form, Hleb was soon a first-team regular and, despite his lack of goals, continued to pose a potent attacking threat for the Gunners. He scored twice in 29 League games for the club, and will be an integral part of Arsene Wenger's young squad for years to come. 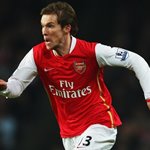