Alexander Doni known as Doni, is a Brazilian former footballer who played as a goalkeeper. He was born in Jundiaí, São Paulo. He is the elder brother of João Paulo Fernando Marangon. Doni also holds an Italian passport. His parental family came from Veneto and his grandmother came from Mantua.

Doni joined Roma on 30 August 2005, after Roma paid the buy-out fee of about US$18,000. He signed a 1+3 year contract worth €300,000 in gross in the first year. With Roma, Doni at first was blocked from first team action by Italian U-21 international Gianluca Curci and was restricted to UEFA Cup games. However, after impressing in cup competition, he replaced Curci in goal for league games. His contract was renewed on 13 April 2006, now worth €1.25 million a season (in gross). In his second season with Roma, he became one of the best goalkeepers of the Serie A. He won Coppa Italia twice in 2007 and 2008, and also finished as the runner-up of Serie A in 2007 and 2008.

Doni earned his first cap with the Brazilian national team against Turkey in Dortmund, Germany on 5 June 2007. In the Copa America 2007, he was selected as Brazil's first choice keeper moments before their first match against Mexico, replacing Helton. His play in the tournament included two penalty saves in penalty kicks against Uruguay in the semi-finals, which sent Brazil to the final. Brazil won the tournament with a 3–0 win over Argentina. On 11 May 2010, it was announced that Doni would be part of the Brazilian squad which would compete at the World Cup in South Africa. He retired from International Football on February 1st, 2013 due to his previous cardiac problems. 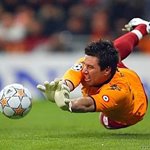