He is perhaps best known for his role as Cameron Frye, Ferris Bueller's hypochondriac best friend in John Hughes' Ferris Bueller's Day Off (1986) (Ruck was 29 when he portrayed the 17-year-old Cameron), and as Stuart Bondek, the perverted, power-hungry member of the mayor's staff on the hit ABC sitcom Spin City, which ran from 1996-2002.

Ruck played Captain John Harriman of the USS Enterprise-B in the 1994 film, Star Trek Generations, a role which he will be reprising along with Generations co-star Walter Koenig and other Trek alumni in the upcoming fan film Of Gods and Men.[1] He also played an annoying tourist on the ill-fated bus in the blockbuster Speed (1994). Another supporting role was of the eccentric storm chaser Robert 'Rabbit' Nurick in the 1996 disaster film Twister. His most recent work in film was as Steve Martin's neighbor in Cheaper by the Dozen (2003).

In 2005, he played "Leo Bloom" in the Broadway version of The Producers, a role initiated by his Ferris Bueller costar, Matthew Broderick.

He was recently cast in the pilot of the Tim Minear-created FOX series Drive, but will not appear in the actual series. He also starred in one episode of the Comedy Central sitcom Stella as Richard, a man looking for work. He starred in Episode 9 of the second season of Scrubs as a patient. He currently plays reporter Steve Jacobson on the ESPN miniseries The Bronx is Burning.

In 2006, he starred in a single episode of Stargate Atlantis called "The Real World".

He has a small role in the upcoming M. Night Shyamalan film, The Happening.

In the 2007 comedy Kicking It Old Skool, he appears as Dr. Fry, quite possibly a reference to Cameron Frye. He evens mentions still needing to save up to get a new Ferrari, quite possibly relating to the fact that Cameron totaled his dad's Ferrari in Ferris Bueller's Day Off. 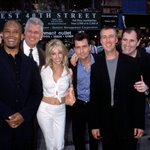