She celebrated her fifteenth birthday by giving herself an unusual present, not realizing that it would become the most important decision in her life thus far ... she started to train in kickboxing.

"I had no idea what kickboxing was, but my friend convinced me to go to the gym one day. It was fascinating and quickly I realized that this is what I want to do in my life."

It took her less than a year to become the runner-up in the European Seniors Championships and at the tender age of seventeen Agnieszka was a World Champion!

Despite her international success, and being best Polish kick-boxer three times, Rylik isn't satisfied with her record at home in Poland. "Somehow, I just had no luck in my fights in Poland", she explains. "During the competitions in Poland I was often ill or injured or I was too busy with my studies."

"In kick-boxing I achieved everything I set out for and had a taste of the life as a professional athlete. Since kick-boxing is in decline nowadays I thought it is time for me to try something new."

Rylik vs. Porteleky, March 2000Agnieszka found out what this might be while watching the televised fights that Polish Boxing Promotion staged for their female featherweight champion Iwona Guzowska.

"Everything about Iwona's career and the professional background provided by Polish Boxing Promotion really convinced me," says Rylik, "It seems to me like I can do well also."

On March 4, 2000 in Torun, Poland, Agnieszka won her pro boxing debut with a fourth-round TKO over Sylvia Porteleki of Hungary, who fell to 3-5.

On April 8, 2000 at Nowa Halle Sportowa in Gdansk, Poland: Agnieszka (135¾ lbs) won an easy first-round TKO over Piroska Beki (133¼ lbs) of Hungary, who fell to 1-2. Rylik decked Beki with a straight right and Beki's corner threw in the towel.

On June 24, 2000 in Torun, Poland, Agnieszka won the WIBF European junior welterweight title over Samantha Rein of Germany by TKO in the fourth round. Rylik was faster and stronger than Rein, and won each round. Rein was floored for an eight count in the fourth. Rylik continued even stronger after this and referee Daniel Van de Wiele stopped the bout. Rein fell to 0-3-1.

On October 14, 2000 in Kolobrzeg, Poland, an audience of 2500 saw Agnieszka, fighting in her hometown, win the vacant WIBF world Junior Welterweight championship with a fourth round KO over former WIBF world champion Diana Dutra of Canada. According to a report from Krzysztof Zbarski, "Diana Dutra was totally confused how to fight against a southpaw. Agnieszka's punches were strong and precise. In the third round Agnieszka landed a left hook which caused a deep cut in Dutra's cheek. In the fourth after a combination of hooks Dutra was floored. After the eight count, Dutra was still down on her knees in no position to continue. Austrian referee Ernst Salzgeber stopped the bout." Rylik moved to 4-0, while the veteran Dutra fell to 5-5-1.

On February 17, 2001 in Kolobrzeg, Poland, a capacity crowd saw Agnieszka successfully defend the WIBF world Junior Welterweight title and move her boxing record to 5-0, 4 KO's with a ten round unanimous (99-90,100-90,100-89) decision over Snodene Blakeney of Austin, Texas, who fell to 10-5 (2 KO's). Blakeney was knocked down once and took an eight count. According to the report from promoter Krzysztof Zbarski after the match, Blakeney "showed unusual durability, taking punishment during all the contest. She was very strong mentally and extremely durable, well prepared physically but lacks boxing skills. Snodene couldn't find a way to fight southpaw and (was) having problem with distance and timing. It was very clean fight (no fouls at all). At (a) press conference after the bout girls showed sympathy and respect to each other." The bout in Rylik's home town was shown live by Wizja Sport in Poland and some channels of UPC Platform in Europe. Snodene Blakeney was coming off a ten-month absence from competition; her last fight was a split decision over Gloria Ramirez on April 1, 2000.

On March 17, 2001 at FTC Handball Arena in Budapest, Hungary, Rylik moved to 6-0 (5 KO's) with a second-round KO of Sanja Stunja of Croatia in a non-title bout that had been scheduled for six rounds. I don't have any record information for Stunja, who is a new name to me.

Rylik in her pro boxing debutOn June 9, 2001 in Kolobrzeg, Poland, Rylik (139 lbs) defended the WIBF world junior welterweight title with a third-round knockout of Mary Ann Haik (139 lbs) of Pearl River, Louisiana. Haik was also knocked down in the first round and had barely beaten that count. Haik fell to 7-9 (1 KO). She had previously fought as a lightweight or featherweight, with losses to Brenda Vickers, Melinda Robinson, Mia St. John, Snodene Blakeney, and Vicki Woods.

On October 13, 2001 at Népligeti Sportcsarnok in Budapest, Hungary, Rylik moved to 8-0 (7 KOs) with a fifth-round TKO over Tanja Rotkvik of Germany, who was making her debut.

On October 27, 2001 in Kolobrzeg, Poland, Rylik retained the WIBF Junior Welterweight title and advanced to 9-0 (8 KO's) with a fourth-round TKO of Kada Omerovic of Bosnia-Hercegovina, who fell to 7-2-1 (3 KO). Omerovic did not come out for the fourth round after taking punishment from Rylik in the second and third rounds of the scheduled ten-rounder. Agnieszka used her crouching style to move in under Omerovic's long lead and work hooks to her opponent's body. The Bosnian was hurt and had few options except to try to smother Rylik's rushes. Rylik often had Omerovic in trouble on the ropes but could not deliver a decisive blow. Clearly in trouble, Omerovic retired on her stool with an elbow injury.

On December 14, 2001 in Budapest, Hungary, Agnieszka (141 lbs) advanced won by a third-round TKO of Silvia Leon (140¾ lbs) of Spain. Rylik was aggressive from the opening bell and backed Leon into the ropes to score with both hands. Leon was able to circle away and survive behind a high guard but did not throw enough punches to threaten Rylik. Rylik picked her opponent off in the second, boxing well on her front foot. Leon landed some clean shots that tested Rylik's chin but showed little boxing ability under the champion’s constant pressure. In the third Rylik was winging in hooks while her opponent tried to hang on for dear life. At several points, Leon simply grabbed Rylik and clung to her, to avoid a knockout. Before the fourth, Leon's corner stopped the fight as her nose appeared to be broken.

Rylik vs. ByrdOn March 22, 2003 at Mandalay Bay Casino in Las Vegas, Nevada, former IFBA Featherweight champion Tracy Byrd (134 lbs) of Flint, Michigan came off the canvas in the second round to win a ten-round split (95-94,96-93,94-95) decision over Agnieszka (137 lbs) in a bout for the WIBO Super Lightweight title. This was Rylik's first fight outside Europe and also her first fight against anyone ranked above her by my computer rankings. Byrd's superior experience and strength of schedule and the fact that Rylik was fighting far from home for the first time added up to a competitive bout. Byrd, who's 38, took the fight on one week's notice and improved her record to 13-7-0 (4 KO).

On November 22, 2003 at King's Hall in Belfast, Northern Ireland, Rylik (141¾ lbs) returned to the ring and won a six-round 59-56 decision over junior welterweight Borislava Goranova (140½ lbs) of Sofia, Bulgaria. This was the first fight on the card and was seen by only a handful of fans because the hall was only just starting to fill up. Rylik improved to 14-1-0 (11 KO) with the win while Goranova fell to 2-6-0 (0 KO).

On April 10, 2004 at the M.E.N. Arena in Manchester, England, Rylik (138 lbs) won a ten-round unanimous decision over Eliza Olson (139 lbs) of the United States for the WIBF and WIBO Junior Welterweight titles. The fight was a contrast of styles with Rylik working well behind her jab and showing quick feet and slick movement to keep away from the powerful American. Rylik landed several strong left hands in the early rounds but lacked the power to score a KO. Olson slipped heavily in the eighth and Rylik was repeatedly warned for holding in the late going. WBAN correspondent JollyDee wrote: "The women boxers fought for both the vacant WIBO Junior Welterweight world title and Rylik's WIBF Junior Welterweight title. The bout was qualitative and balanced as well. Rylik's jabs were dominating the match but the Olson was better in in close fighting and her uppercuts were very dangerous. At the beginning of the match, Rylik was dominant, however in the middle of the fight Olson, succeeded in taking charge. In the end Rylik was able to take on the match again because of her stamina. When the fight ended, both boxers believed to be the winner. On the cards Rylik was victorious (98-94, 98-94, and 97-94) however in my opinion 97-94 was the most objective." (For more of JollyDee's photos of this fight see WBAN Photo Gallery #161 on the WBAN Records Member Site). Olson fell to 7-3-2 (2 KOs).

Polish Boxing Promotion analyzed the Olson fight as follows: "The very first fight of the evening had Agnieszka Rylik facing a hungry young fighter from America ... Olson was an aggressive come forward fighter with only two losses on her record. The circumstances of one of those losses proved to be significant. Olson had previously lost to a southpaw with a significantly poorer record. It was clear from the outset that Olson's only tactic was to try and rush Agnieszka, using her superior weight to pin her on the ropes, while clubbing away on the inside. Rylik, although displaying some ring rust after a serious injury to her Achilles tendon left her inactive for much of 2003, was able to out box Olson, at times leaving her swinging at air. When the American's crouch and charge tactic did get her inside, the Pole was able to smother her, preventing any effective work. Although Olson was extremely game, and kept going until the final bell, the scorecards clearly reflected Rylik's control of the action. It was a great return to top level competition for Agnieszka, particularly given the difficulties she had faced in the previous year."

On December 18, 2004 at the Bujtosi Sport and Leisure Center in Nyíregyháza, Hungary, Agnieszka Rylik (137¼ lbs) won a clear ten-round unanimous (all 100-90) decision over 19-year old Iva Weston (5'7½",137 lbs) of Barrackpore, South Trinidad in defense of her WIBF Light Welterweight Title. There were no knockdowns. Trinidad and Tobago's international matchmaker Buxo Potts, who negotiated the fight, said there was a return clause in the contract and Rylik must give Weston a re-match in six months, likely in Port of Spain. "The ideal setting would be a clash between Weston and Giselle Salandy in the interim. Salandy is the Latin American champion and Weston is the No 1 contender for that crown and is entitled to a shot," said Potts. Weston was a definite underdog against the ultra-aggressive Rylik, but her awkward style and switching from a southpaw to orthodox, made life difficult for Rylik at times. Weston reportedly received US$5,000 for the fight. Weston fell to 9-2-0 (1 KO).

Agnieszka is not carried away by her success in sports, and realized that a sound educational background is also important. She is in her fourth year of studying politics in the Academy of Management and Banking in Poznan. But she is quick to point out that except sports there are no other "loves" in her life. Besides ring combat, she enjoys the occasional basketball or tennis match. 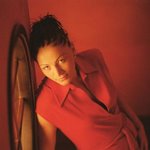 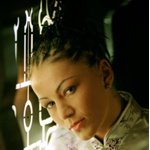 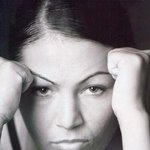 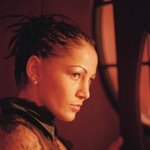 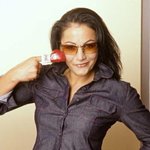 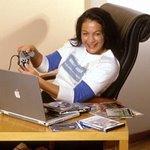 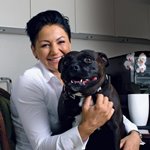 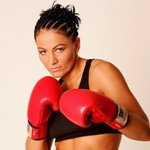 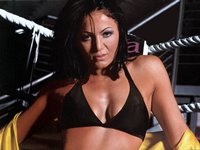 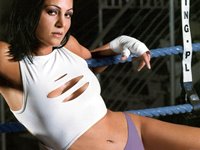