She defeated Tamira Paszek of Austria to win the 2005 Girls' Singles Championship at Wimbledon. As a professional, her highest career singles ranking is World No. 8, achieved on 22 February 2010. As of 22 February 2010, she is ranked World No. 8.

In 2007, Radwańska became the first Polish player in history to claim a Sony Ericsson WTA Tour singles title when she won the Nordea Nordic Light Open. In 2008, she won three more singles titles: the Pattaya Women's Open, the Istanbul Cup, and the International Women's Open.

On 24 May 2008, she became the first Polish female tennis player to surpass US$1 million in career prize money. 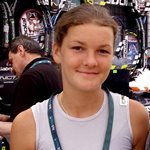