Adrian Lewis Peterson (born March 21, 1985 in Palestine, Texas. nicknamed A.D. ("All Day"), is a professional American football running back for the Minnesota Vikings of the National Football League (NFL).[5] He played college football as a running back for three years at the University of Oklahoma. At Oklahoma, Peterson set the NCAA freshman rushing record with 1,925 yards (as a true freshman and not a redshirt freshman) as a first team All-American, when he also set the freshman record of runner-up in the Heisman Trophy balloting, and finished as the school's third all-time leading rusher.

Peterson was selected by the Minnesota Vikings with the seventh overall pick in the first round of the 2007 NFL Draft. Coming into the league, he was known as a tall, upright runner possessing an ultra-rare combination of speed, strength, agility, size, and vision, along with a highly aggressive attitude towards contact.[2] His rare talent as both a great breakaway and power runner has often raised comparisons to past legends, including Eric Dickerson, O.J. Simpson, Walter Payton, Bo Jackson, Gale Sayers, and Jim Brown. As a rookie in the NFL, he has broken numerous franchise and league records for rushing yardage, foremost being the NFL single-game rushing record when he ran for 296 yards on 30 carries on November 4, 2007, against the San Diego Chargers. Following his stellar first pro season, Peterson was a near-unanimous choice as the NFL Offensive Rookie of the Year. In the 2008 NFL Pro Bowl, Peterson rushed for 129 yards and two touchdowns, achieving the second highest rushing total in Pro Bowl history. Peterson was awarded the MVP award for his performance in the Pro Bowl, which led to a 42-30 victory over the AFC. 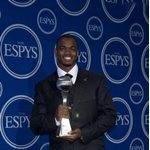 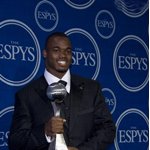 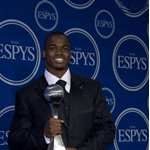