BIOGRAPHY
American child actress Adair Tishler was born October 3, 1996 in Nashville, Tennessee. She has appeared in many television shows, including Charmed, The Sarah Silverman Program, and House. Currently, she is playing Molly Walker in NBC's Heroes. She won a Young Artist Award 2008 for Best Performance in a TV series for the role.

Tishler has also been in a few theatre productions, uncluding Cinderella and The Sound of Music. She also appears in Martina McBride's music video for the song God's Will.

Other performances by Tishler include the role of Carrie in 'Six and the City,' a short comedy. She also plays Tara in the new American Girl movie, Chrissa Stands Strong. 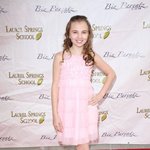