For all the good things that have come Aaron Pritchett’s way the past few years, for all the accolades and awards, the airplay, the video play and the fans showing up everywhere he goes, for all that and the mere fact he can make a living at this music thing, he takes none of it for granted.

And it’s for that reason he decided to call his fourth and latest album "Thankful." It’s the best thing he’s ever done, he thinks. But there’s more than a touch of angel dust serendipity that gives it life.

The exponential growth of Pritchett’s career is the result of a lot of solid planning and arduous work. But, there was a time not so long ago when he’d actually quit the business.

“Believe me, I was done,” he says. “We were still playing clubs but I couldn't make a living. It wasn't where I saw my future. I wanted to be touring as a major act through Canada and into the States. I said in October 2003, if it's still like this by December, I'm quitting as of the first of January. The day after, January 2nd, 2004, the video for “New Frontier” went to number one and all these bookings came in literally that week. From that moment, everything changed.”

And like spring follows winter, the nominations and awards started coming in, too. He and the band were knocking audiences out from Newfoundland to Vancouver Island, slamming it every night. Now it was a question of maintaining the momentum.

Aaron's third album, "Big Wheel," managed that superlatively. From the title track and “Done You Wrong” to the rabble-rousing, suds-spilling, barroom anthem and the Canadian Country Music Association's SOCAN Song Of The Year, “Hold My Beer,” Pritchett and Big Wheel had kicked down the barn door.

Now with Thankful he's taking the time to pause and take stock a bit: smell the roses. “Yeah, it's reflective,” he says. “A little more introspective. Instead of worrying about recording another 'Big Wheel,' I needed to record something more about my life and me as a person. And I didn't put pressure on myself to write. I wrote because I wanted to, not because I needed to.”

There's the lush, panoramic testament to the power of love in “After The Rain”, the anthemic, exhilarating “How Do I Get There” with a put-the-top-down rhythm like a set of all-season radials rolling fast and hard down a ribbon of blacktop, while the declarative “Unravelling” is the heartland tune Bob Seger or Mellencamp would have pounded their chests and thanked the Song Gods for. On the flip side is “Let's Get Rowdy,” the call to party arms for all the college girls and cowboys.

The sound on "Thankful" is rich and driving, immediately infectious, thanks to the collective production efforts of The Franchise: Aaron himself, guitarist and co-writer Mitch Merrett, multi-instrumentalist Mike Norman and studio wiz Dean Maher who has shared control rooms with everybody from Bryan Adams and Michael Buble to AC/DC. Now there's a team to make a great record.

But none of it would matter without the fans to embrace it, to make it part of their lives. That's the point that has been driven home continually for Aaron Pritchett, one electrifying performance after another, ever since that pivotal January 2nd just a few years ago. And he hasn't forgotten.

“It sounds so corny sometimes, but it’s honestly true,” he says quietly. “The help of fans wanting us to play and coming to see the shows is what's kept me in the industry. This album really is a tribute to them. If I didn't have them I wouldn't have anything. I really am extremely thankful.” 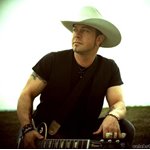