Kelly is the youngest of three brothers, was born in Davenport, Florida. Because of the difficult circumstances between his biological parents, Kelly was legally adopted by his aunt and uncle at the age of five, moving to Nashville, Tennessee, and then Sonestown, Pennsylvania.[1] He has sung professionally since the age of nine, performing at festivals and fairs and opening for such acts as Loretta Lynn, Emerson Drive, Bill Anderson and The Marshall Tucker Band. At age 11, he was a finalist on PAX-TV's America's Most Talented Kid.[2]

Kelly once had a job selling soda on a beach near his home.[3] He is currently a junior at the Pennsylvania Cyber Charter School. 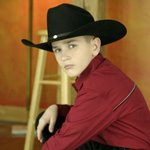