After graduation, Aaron Eckhart moved to Manhattan and found a few notable commercial jobs. He then went to Los Angeles and landed a string of bit parts, including in Showtime's 1992 movie Double Jeopardy (starring Rachel Ward, Bruce Boxleitner and Sela Ward), an extra in an episode of "Beverly Hills, 90210" (1992) and a turn as Samson in the 1993 CBS special "Ancient Secrets of the Bible, Part II." He was also seen in writer-director James Glickenhaus' 1994 thriller Slaughter of the Innocents and the 1996 sci-fi comedy series "Aliens in the Family."

In 1997, he finally got his first big break, thanks to college classmate Neil LaBute who gave him the starring role of Chad, Matt Malloy's co-worker who is angry and frustrated with women, in the wicked dark comedy In the Company of Men (also featuring Stacy Edwards). Portraying the memorably villainous character, which was seductive and charming on one minute, but turned sadistic and cruel on the next minute, Eckhart received positive reviews and won Golden Satellite’s Outstanding New Talent and Independent Spirit Award’s Best Debut Performance.

The next year, LaBute asked Eckhart to team with Gwyneth Paltrow playing two scholars who investigate the affair of a fictional Victorian era poet, in the romantic mystery drama Possession, based on the novel by A. S. Byatt. In 2003, Eckhart played a geophysicist in Jon Amiel's sci-fi disaster film very loosely based on the novel by Paul Preuss, The Core (alongside Hilary Swank and Bruce Greenwood) and signed up with director Ron Howard to play Cate Blanchett's ranch hand/lover in the Western thriller based on the novel "The Last Ride" by Thomas Eidson, The Missing (also starring Tommy Lee Jones). He also became Ben Affleck's mysterious employer in John Woo's adaptation of the short story by science fiction writer Philip K. Dick, Paycheck, which also featuring Uma Thurman and Paul Giamatti.

TV viewers could catch Eckhart on the final episodes of the NBC sit-com "Frasier" in 2004, as the insensible boyfriend of Dr. Crane's matchmaker love interest (Laura Linney). In June that year, he also performed on stage, co-starring with Julia Stiles in "Oleanna" at the Garrick Theater in London.

Meanwhile, Eckhart continued to add to his film resume by starring as Dallas FBI Agent Thomas Mackelway who investigates serial killers in E. Elias Merhige's 2004 thriller Suspect Zero, along with Ben Kingsley and Carrie-Anne Moss. He recently played the lead role of the chief spokesman for the tobacco lobby, Nick Naylor, in Jason Reitman's satirical comedy Thank You for Smoking (with Maria Bello and Adam Brody), based on the novel of the same name by Christopher Buckley, and starred as a well-educated psychiatrist in writer-director Joshua Michael Stern's mystery drama Neverwas (with Ian McKellen and Nick Nolte). He also starred opposite Helena Bonham Carter in Hans Canosa's romantic drama comedy Conversations With Other Women.

Eckhart will soon complete his upcoming film project, Brian De Palma-directed thriller drama, The Black Dahlia. In the film, based on the 1940s-set novel of the same name by James Ellroy, Eckhart and Josh Hartnett play a detective partner who caught in a love triangle with Scarlett Johansson's character. He will also soon be seen acting opposite Welsh beauty Catherine Zeta-Jones in an untitled Scott Hicks film and opposite Jessica Alba in writers-directors Bernie Goldmann and Melisa Wallack's drama comedy Bill. 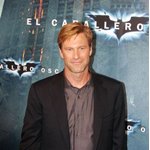 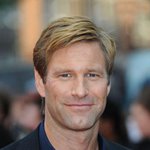 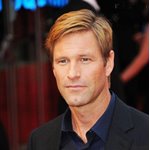 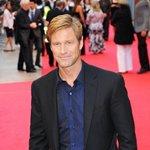 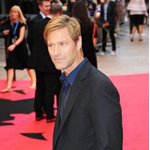 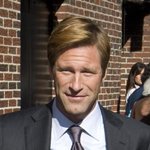 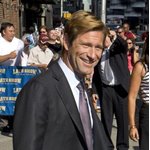 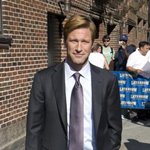