Aguilera initially appeared in the World Wrestling Federation with Christopher Daniels as Uno, one half of Los Conquistadores during the time Edge and Christian were masquerading as the team.He was rehired nearly 4 years later to perform under the gimmick of Jesús. As part of a kayfabe storyline, Jesús was accused of stabbing John Cena at a Boston, Massachusetts nightclub by order of Carlito Caribbean Cool. After Cena defeated Carlito for the WWE United States Championship, Jesús attacked Cena several times in the next couple of weeks, finally hitting him in the kidney with Cena's own chain, temporarily sidelining him.In reality, Cena required a break from WWE while he was out of the country filming The Marine, which was being filmed at the Warner Bros./Universal Studios on the Queensland Gold Coast in Australia.
Aguilera faced John Cena in a Street Fight at Armageddon 2004 for the WWE United States Championship, but was defeated. Due to an injury sustained at a house show in Johnson City, Tennessee, he went into the match with a torn groin and two herniated discs in his back, and left to have surgery immediately afterwards. The surgery was successful.
Aguilera was released from his WWE contract on April 12, 2005.

Stealing one of his "so called" old wrestling personalities, the Hardcore Kidd, Aguilera appeared in Ultimate Pro Wrestling, marking his first wrestling match since being released by WWE. On August 6, 2005, Aguilera started appearing in the Pro Wrestling Guerrilla (PWG) promotion, first losing to T.J. Perkins (aka Puma), and then on the August 19, 2005 teaming with Davey Richards to defeat Perkins and Alex Shelley. On September 30, 2005, Aguilera lost to his former tag team partner Christopher Daniels at Adrenaline Unleashed. On October 22, 2005, Aguilera appeared at AWS, teaming with Al Katrazz to defeat Davey Richards and Tony Kozina. Then, on November 19, 2005 with the PWG, Aguilera teamed with Petey Williams, losing to Frankie Kazarian and Chris Sabin. On November 26, 2005, Aguilera wrestled Babi Slymm to a no-contest. Then at the January 15, 2006 Pro Wrestling WAR show, Aguilera wrestled Charles Mercury to a no-contest. Then in the main event, Aguilera & Keiji Sakoda wrestled Teddy Hart and Jack Evans to a double countout. Afterwards, Hart did a moonsault off a basketball hoop and injured his knee. Aguilera made an appearance at AWS at Frank and Sons on May 20, 2006 and picked up a win against "Scrap Iron" Adam Pearce after hitting Pearce in the head with a boot that he took from Pearce's manager, C. Edward Vander Pyle. Aguilera challenged Pearce and Vander Pyle to a tag team match on July 8, 2006 with his manager, El Jefe.
On February 4, 2006, Aguilera made his Florida wrestling debut with Nick Mayberry's Hardkore Championship Wrestling, at the 2006 HCW Incredible 8 Tournament. He defeated former WCW enhancement talent Casey Thompson in the opening round, second generation wrestler "J-Dawg" Jeff Brooks in the second round, and then "The King of The Indies" Reckless Youth in the final round of the tournament. He became the 4th person ever to win an Incredible 8 Tournament, behind Shark Boy, Reckless Youth, and Dagon Briggs.
In March 2007, Aguilera officially made a challenge for the NWA World Heavyweight Championship. He has also appeared briefly in the IWA in Puerto Rico. 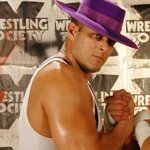